"I am here to support KKR. I hope Gambhir can bat well today," said Shreya Sen, a KKR fanatic.

Kolkata: While there may be a debate on whether there is an overkill of cricket, the city’s enthusiasm for the sport remains intact as the Eden Gardens witnessed a near capacity crowd for the Indian Premier League (IPL) opener between Kolkata Knight Riders (KKR) and Mumbai Indians.

Less than ten days after the conclusion of the World Cup, where India failed to defend their title, over 50,000 supporters gathered at the stadium as the cash-rich league entered its eighth edition.

Appreciated all over the cricketing world for their sporting outlook, the crowd at the Eden Gardens included a fair number that egged on the visiting Mumbai team, although the loudest of cheers were reserved for the Gautam Gambhir-led purple brigade.

Mostly dressed in purple and armed with flags screaming “KKR”, the fans made their way into the stadium after passing through at least three frisking points. But they patiently endured the long wait.

“I am happy to be back at the Eden Gardens. Hope KKR can defend their title,” said Rohit Sarkar, an I.T. employee.

The emcee for the night egged on the crowd and they responded with chants eulogising the home team. Gambhir drew loud cheers when he won the toss and decided to field first.

“I am here to support KKR. I hope Gambhir can bat well today,” said Shreya Sen, a KKR fanatic. 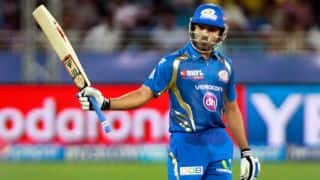