The counter was closed on Friday and Saturday as cricket fanatics thronged the ground in search of a valid pass to witness the final.

Kolkata: It will be a sellout crowd at the iconic Eden Gardens as two time champions Chennai Super Kings (CSK) lock horns with the 2013 winners Mumbai Indians (MI) in the Indian Premier League (IPL) 2015 final on Sunday. MI vs CSK, IPL 2015 Final at Eden Gardens, Preview

The famed cricket venue, that hosted the 1987 World Cup final, now has a 66,000 plus seating capacity. CSK to lock horn against MI in IPL 2015 mega final

According to sources, tickets kept for online purchase were sold out within hours. The tickets kept for box office sale from the Mohammedan Sporting ground also disappeared in no time. Mumbai Indians vs Chennai Super Kings, IPL 2015 Final: Key Clashes

The counter was closed on Friday and Saturday as cricket fanatics thronged the ground in search of a valid pass to witness the final. IPL 2015 Qualifier 2: Mike Hussey satisfied to contribute

Friday also witnessed police arresting the black-marketers who were selling the tickets at almost double their prices to the supporters. Ashish Nehra: I have been bowling well over the last few years

A day later the number of black-marketers had considerably decreased, but in the periphery of the Eden one came across dozens of people secretly asking, “ticket lagbe?” (do you need a ticket?). IPL 2015 final: Dhoni’s leadership key to CSK’s success, says Suresh Raina

There were earlier speculations that the ground would not be packed to capacity as the home team Kolkata Knight Riders (KKR) had crashed out of the tournament. However, the Cricket Association of Bengal officials had then seemed confident of a houseful Eden. IPL 2015 Final: Rohit Sharma urges MI to put up one last effort against CSK

“Yes, KKR may have crashed out, but it is the final and the demand for tickets was huge,” CAB treasurer Biswaroop Dey told IANS. Rohit Sharma’s and Eden Gardens: The love-affair continues

With tickets sold out and fans travelling to the city from all across the country, Eden on Sunday awaits an extravaganza that concludes one and a half months of ‘tyohaar’. 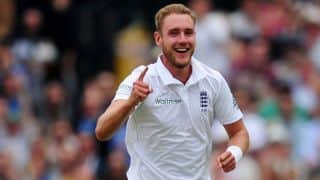 England record most number of extras in a Test at Lord's 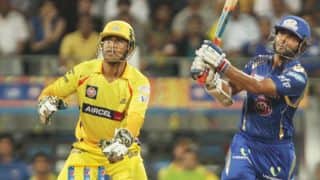