Though Gambhir and Raina have most fifties, Gayle (3.35 innings per fifty) and Warner (3.684) have been more prolific.

Gautam Gambhir, captain of Kolkata Knight Riders (KKR), holed out to Mandeep Singh off Yuzuvendra Chahal for a 46-ball 58 against Royal Challengers Bangalore (RCB) in the Indian Premier League (IPL) encounter at Eden Gardens, Kolkata. He had earlier pushed one to the leg off Varun Aaron to bring up his 25th IPL fifty — the most by any batsman. LIVE SCORECARD: Kolkata Knight Riders vs Royal Challengers Bangalore

Gambhir went ahead of Suresh Raina, who is currently on 24 fifties from 113 innings. Gambhir has reached the landmark from 105 innings. Others with 20 or more IPL fifties are Rohit Sharma (23 from 109 innings) and Chris Gayle (20 from 67 innings). LIVE UPDATES: Kolkata Knight Riders vs Royal Challengers Bangalore

Raina, Shaun Marsh, Virat Kohli, and MS Dhoni have played for only one IPL franchise. Though Gambhir and Raina have most fifties, Gayle (3.35 innings per fifty) and David Warner (3.684) have been significantly more prolific. However, the cake goes to Shaun Marsh, who, with 17 fifties from 51 innings, has scored a fifty every three innings. Indian Premier League (IPL) 2015: Complete coverage 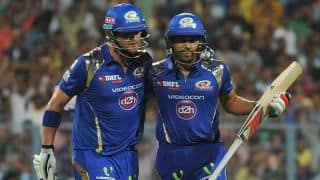