The opener added that the Knights have to be at their best from here on.

Kolkata: Skipper Gautam Gambhir on Saturday said the Kolkata Knight Riders (KKR) do not lack batting firepower and hopes to see a turnaround of fortunes when they meet Rajasthan Royals (RR) in the Indian Premier League (IPL) at the Eden Gardens here on Sunday.

“I do not believe we lack batting firepower. We have played decent cricket and the two games we lost was because of some brilliant individual performances,” Gambhir said on the eve of the match. IPL 2015 schedule: IPL 8 match time table with venue details

“Rain played a crucial part, 118 to get in 12 overs; it was a tough task than what the original target was (177 from 20 overs). With the batting strength we have, we could have chased down the target given it was a full-game,” added the captain, referring to their last match against Sunrisers Hyderabad (SRH).

The left-handed batsman said it gets difficult, especially when chasing revised targets.

“You cannot handle weather. It gets tough especially sometimes chasing revised targets. But right now we are only looking forward to playing good cricket,” he said.

The opener added that the Knights have to be at their best from here on.

“It does not matter with whom the momentum is. Most teams are equally balanced and you cannot take any team lightly. To beat them we have to be at our best,” said Gambhir. Indian Premier League (IPL) 2015: Complete coverage 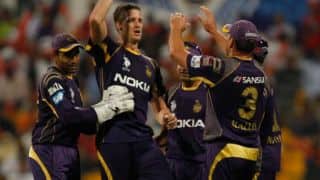 KKR, Uber to give fans an opportunity of a lifetime