Kings XI Punjab will look to get their campaign back on track against Delhi Daredevils.

Coach Sanjay Bangar told media that Marsh was hit on his toe while Bailey took a blow on his shoulder while practicing today ahead of the clash against Delhi Daredevils (DD). “We have some injury issues, so team combination can be decided only tomorrow,” Bangar told mediapersons.

If the two injured players are unable to take field against DD, it will certainly raise hopes for Glenn Maxwell and Virender Sehwag to make the final cut. Maxwell has not played in the last two matches while Sehwag was dropped from the team in the previous game. Asked how difficult it was to have a player like Sehwag left out from the playing XI, Bangar said the batsman has taken the decision well in his stride without any fuss. Yuvraj Singh ties up with Delhi Daredevils for cancer awareness

“The format is such that many times big players do not get to play. I don’t have to tell you the names but some big players (in other teams) have missed out. I think players understand, it’s a fact in Twenty20 cricket,” he said. PHOTOS: Kings XI Punjab vs Sunrisers Hyderabad, IPL 2015 Match 27 at Mohali

Punjab ended up runners-up in last edition but this time at the half-way stage they are at the bottom of the heap with just two wins from seven matches. Bangar though was optimistic of making their way up the ladder. “One win can propel the team. The momentum plays a part.

It’s a very tight table, the competition is even and all eight teams still have a chance to make the play-offs,” he said. Bangar had a very successful stint with Punjab in the last edition and then worked as assistant coach with the Indian cricket team on the Australian tour. IPL 2015: David Warner delighted to get balance of the team right

Asked about the changes in his approach as a coach, Bangar said, there was not much. “Results dictate how a coach is seen. We are trying to do better. The communication, the strategy however has not drifted much. It’s just that the team is going through a bad phase.”

The Punjab coach said it was a big setback to the team that the batsmen have not performed to their true potential. “If you don’t get start, it becomes difficult. When your best players do not contribute it impacts the team.” IPL 2015: Trent Boult feels happy to be rewarded for his efforts

Bangar said the conditions would play a big role in the outcome of the match and hinted that the untested spinners may come into play tomorrow. “We have good spinners. Axar [Patel] has done well. In Pune and in Mohali, there was a lot of grass and other players [pacers] got the opportunity to play. We have a good combo,” he said. 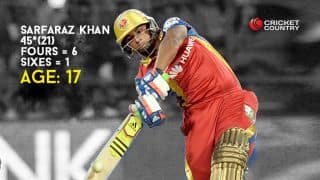