Despite boasting three World Cup winners in their ranks, the last season's runners-up have been the biggest flop of IPL 2015.

Kolkata: They are out of contention for a play-off berth but that won’t stop them from spoiling another team’s party, Kings XI Punjab coach Sanjay Bangar said sending an alarm bell to Kolkata Knight Riders camp on the eve of their Indian Premier League (IPL) 2015 encounter. Despite boasting three World Cup winners in their ranks, the last season’s runners-up have been the biggest flop of the season as they are yet to get their rhythm right with just two wins from 10 matches, pushing them down to the bottom of the points table. SCORECARD: KKR vs KXIP IPL 2015 Match 44 at Kolkata

“We have been quiet so far and we are bound to hurt some team in a big way. I expect that to happen sooner rather than later wherein we will hit some teams pretty badly,” the soft spoken Bangar told reporters at Eden Gardens. Lack of decision making under pressure has hurt Kings XI Punjab, says Sanjay Bangar

KKR might have thrived on their all out spin attack but Bangar reminded that they had notched 199 in the 2014 final in Bangalore only to go down by three wickets. “We in fact scored 199 runs which not many opponents have scored against Kolkata. We are well aware of that and we are looking forward to tomorrow’s game. I think we have a good mix of players who can play spin well and also the pace bowling. If you look at our batting line-up there are three or four quality players of spin bowling. It is not only Indian batsmen who play spin well,” he said.

Bangar also praised Gautam Gambhir and Co for putting up a consistent show since their maiden triumph in 2012. “KKR has been a very consistent team led well by their captain. They are banking a lot on their bowling which has been a very good mix of spinners and fast bowlers. They are well aware of their strengths. All is going really well for them, but having said that we are going to hit some team badly and who knows it could be tomorrow.”

Having lost out on the last four hopes, Bangar further said he would like to think ahead. “We will try and reach our own internal targets as far as execution is concerned in all three departments of the game. We are also trying to keep the confidence levels up in the team,” he said. 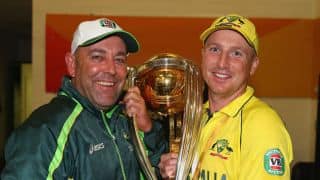