For KKR, the last-over win against CSK came as a massive shot in the arm.

With last night’s win, KKR moved up a rung to the third position on the points table with four wins, two losses and one abandoned match. RCB, on the other hand, have won three and lost as many in seven games and are on fourth position.

For KKR, the last-over win against CSK came as a massive shot in the arm as they prepare to take on a rejuvenated RCB, who posted 200 runs despite the failures of Kohli and West Indian swashbuckler Chris Gayle, against Rajasthan Royals (RR). IPL 2015 Highest wicket-taker: List of best bowlers in IPL 8

Captain Gautam Gambhir lauded the power-packed innings of Robin Uthappa and Andre Russell, which helped KKR come back on track.

Uthappa cracked a match winning unbeaten 80 and stitched a superb partnership for the fourth wicket along with Russell, who scored a brilliant unbeaten 55 in no time. READ: Sarfaraz Khan, Shreyas Iyer, Deepak Hooda show the future of Indian cricket is in good hands

Other batsmen, including Gambhir and Yusuf Pathan, have been inconsistent and bowling has been a bit patchy. However, Australian Chinaman bowler Brad Hogg has bolstered the bowling after he picked up crucial wickets against CSK in the last match. For RCB, it has been a mixed bag so far, recording three wins and as many loses.

But after a sedate start, RCB returned to form with two consecutive away wins against Rajasthan in Ahmedabad and Delhi Daredevils at the Feroz Shah Kotla. But a dismal record at home would be a major concern for RCB going into tomorrow’s game. READ: Sarfaraz Khan becomes youngest cricketer to play in IPL history

RCB have so far failed to take the home advantage. They lost all three matches against Sunrisers Hyderabad (SRH), Mumbai Indians (MI) and Chennai Super Kings before their home crowd.

With the likes of Gayle, Virat Kohli and AB de Villiers in their ranks, RCB boasts of a formidable batting line-up.

Gayle and Kohli have had a slow start to this year’s campaign but have gained momentum with time. Kohli, in fact, returned to form with two half centuries in the last three games. RCB’s bowling attack, seen as a weak link, also came good against Delhi the other day.

Led by Australian Mitchell Starc and supported well by Varun Aaron and David Wiese, RCB’s pacers produced a lethal display to bundle out Delhi for meagre 95 runs in their last match and set the platform for the easy win.

On the spin front, RCB’s leading wicket-taker this season with 10 scalps, Yuzvendra Chahal, will be a hard nut to crack. 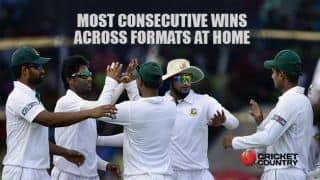 Bangladesh’s streak and most consecutive wins across formats at home 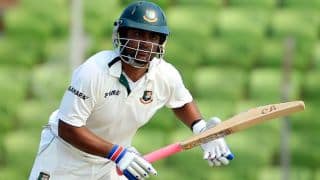