Mumbai Indians however managed to win the match against Sunrisers Hyderabad easily.

Lasith Malinga of Mumbai Indians (MI) was on Sunday fined five percent of his match fee for breaching the Indian Premier League (IPL) Code of Conduct during the match against Sunrisers Hyderabad (SRH) at the Wankhede Stadium on Saturday. Mitchell McClenaghan asked Sachin Tendulkar for coaching lessons

According to a release from the Board of Control for Cricket in India (BCCI), match referee Roshan Mahanama found Malinga guilty of the level 1 offence (Article 2.1.8) of conduct that is contrary to the spirit of the game. For level 1 breaches of the IPL Code of Conduct, the match referee’s decision is final and binding. MI vs SRH, IPL 2015: Tom Moody slams poor batting by Hyderabad batsmen 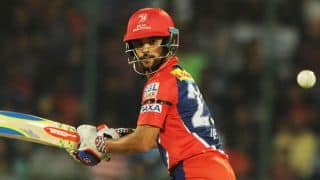