Catch the updates as we build up for the Indian Premier League (IPL) 2015.

List of players who were released by the IPL franchises for IPL 8:

Released players will go to auction Pool & will be interesting to see who is going to take them Auction will be held in Jan 2nd Week!! #IPL

Yuvraj Singh who was bought by Royal Challengers Bangalore (RCB) team in the IPL 2014 season has been released by the franchise for the upcoming season.

According to reports, Yuvraj who was bought by RCB for whooping INR 14 crores was the most expensive player to be sold in IPL 7. But he failed to put up impressive performances for the franchise. RCB finished at the seventh spot in IPL 2014. Yuvraj played 14 matches for the franchise in the 2014 season and scored 376 runs which included three half-centuries. Read full report here

Indian Premier League (IPL) side Delhi Daredevils on Monday released their expesive purchase of the 2014 auction, Indian cricketer Dinesh Karthik, ahead of the upcoming edtion of the T20 league.

Indian batsman Karthik was on Tuesday bought by the Dehli Daredevils for Rs 12.5 crore in the Indian Premier League (IPL) auction 2014. Karthik was another player in the Mumbai Indians squad who had missed out on retention. Read full report here

Kings XI Punjab (KXIP) released Cheteshwar Pujara, Laxmipathy Balaji and Murali Kartik from their squad for the next season of Indian Premier League (IPL). These cricketers were not regular in their playing eleven and the KXIP. Read full report here

The Indian Premier League (IPL) 2015 will be played from April 8 and the franchises have started the process of releasing and retaining the players according to their preference. Hello and welcome to CricketCountry’s blog on the updates from the T20 league.

Kings XI Punjab (KXIP) released Cheteshwar Pujara, Laxmipathy Balaji and Murali Kartik from their squad for the next season of Indian Premier League (IPL). These cricketers were not regular in their playing eleven and the KXIP.

The biggest news that has come so far in ahead of the IPL auction 2015 is that star Indian all-rounder Yuvraj Singh has been released by the Royal Challengers Bangalore (RCB). The Bangalore-based franchise had purchased the cricketer for a whopping price of Rs 14 crores — making him the costliest player in the IPL auction 2014.

Monday was the last day for franchises to send the IPL a list of players they wanted to release. The franchise paid Rs 1.9 crore for Pujara, Rs 1.8 crore for Balaji and Rs 1 crore for Kartik at the auction held this February. Kings XI can now generated Rs 4.7 crore to their auction purse for the 2015 season.

Last season, KXIP reached the final of IPL and lost narrowly against Kolkata Knight Riders (KKR). The George Bailey-led team have a well balanced squad with full of T20 specialists. So it was tough for players like Pujara, Balaji and Kartik to get a place in the playing eleven. 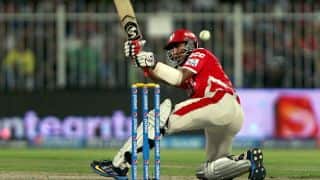