Bengaluru: Ahead of their away game against Royal Challengers Bangalore (RCB), Chennai Super Kings (CSK) fielding coach Steve Rixon said the loss to Rajasthan Royals was a wake up call that the team needed to keep them on their toes for the remainder of the Indian Premier League (IPL) campaign. Ajinkya Rahane, Shane Watson help Rajasthan Royals trounce Chennai Super Kings by 8 wickets

Rajasthan Royals outplayed CSK to win the match by 8 wickets on Sunday. The Chennai bowlers were hammered to all parts of the field as Royals openers Ajinkya Rahane and Shane Watson shared a 144-run partnership for the first wicket to chase down a target of 157 runs.  “It is something that every side needs at some stage, to be beaten somewhere along the way. It was rather a wake up call,” Rixon was quoted as saying by iplt20.com on Tuesday.  “But to be beaten so well indicated we need to shake ourselves up a bit and we are aware of that. We are on the track to do that and we will get it right in this particular game,” he said. MS Dhoni admits to eating up too many deliveries against Rajasthan Royals

The jolt of the loss against Royals forced an introspection within the CSK camp. “We were very clear with our messages. We normally do one-on-one with the guys. We had a chat with the top-order batsmen to make adjustments in the way they thought about their games. Our bowlers, with 160 on the board, they probably needed a few more than that to bowl with,” he said. Ajinkya Rahane becomes leading run-scorer of IPL 2015 in RR vs CSK IPL 2015 Match 15

Despite the loss, CSK start out as favourites against RCB who were beaten in their two home games by Sunrisers Hyderabad and Mumbai Indians. Rixon said the fact that the home team is on the backfoot and desperate for a win could make them a dangerous opponent.  “The fact that they have been beaten twice at home now makes them a very dangerous opposition. They will be desperate to get off the mark as Mumbai Indians was the other day (when they beat RCB). They came out swinging and played extremely well. We are expecting the same here because we know RCB have some absolute match winners amongst them,” Rixon said. 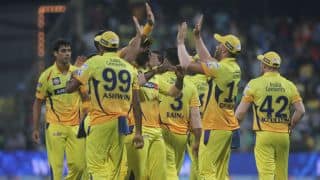