Mitchell Starc earlier confirmed that he would be participating in the ongoing IPL.

Australia pacer Mitchell Starc arrived in Bangalore on Monday in order to participate in the Indian Premier League (IPL) 2015 for the Royal Challengers Bangalore (RCB). Starc had missed out the first three games for his team due to fitness issues, and had confirmed his participation by posting on microblogging website Twitter on Sunday. READ: Mitchell Starc could have made the difference for RCB, says David Wiese

Bags packed for 5 months.. Off to join @RCBTweets tomorrow.. Good luck to the boys tonight! #PlayBold

Starc was forced to sit out of the initial leg of the eighth edition of the IPL due to a knee niggle, which he had apparently during the latter stages of the ICC Cricket World Cup 2015, in which he was declared the ‘Player of the Tournament’ for his haul of 22 wickets from eight innings at an average of 10.18.  IPL 2015: Points Table and Team Standings

Starc was bought by RCB last year for a sum of INR 5 crore, and proved to be a great value for money as he took 14 wickets in as many games, being one of the few reasons for his team to cheer in an otherwise disappointing run in the tournament, finishing seventh in an eight-team tournament. IPL 2015: Complete Coverage 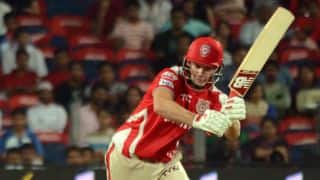