Delhi Daredevils are on a nine-match losing streak at home.

The fierce city rivals are locked at 5-all in their league encounters so far, but MI, who have just recorded a single win in five matches, have won quite a few games on DD’s turf. Bond is indeed relishing the team’s challenge. Read: Delhi Daredevils hungry to set record right at Feroz Shah Kotla, says JP Duminy

“I think Delhi have struggled at home for a long period of time to win matches and we (Mumbai Indians) take confidence from the fact that we have done well (at Kotla) and have had success here,” said the former New Zealand pacer on the eve of the match. IPL 2015: Schedule with venue details

“But to be fair it’s a pretty even contest. Delhi should have won their first two games, they won another couple of games, so we know that we will have to play well here to beat them and their leg-spinners present a different challenge for us as well,” he added. IPL 2015: Points Table and Team Standings

DD’s Zaheer Khan may have missed the action so far, but Bond, who hung up his international bowling boots in 2010, still believes that the left-arm pacer’s presence is a big boost for the side.

“Zak’s a great player and whenever young players take the field with great players it gives them a boost. They get confidence that they have got a world class player in your line-up. So if he plays it’s going to be big,” the 39-year-old speedster said.

After four straight opening losses, MI finally crossed the line against Royal Challengers Bangalore. The Rohit Sharma-led side posted a mammoth 209 and won by 18 runs. Bond is hoping the team takes the momentum forward.

“I thought it was a really good performance considering that we played in parts but to put 210 against a good RCB side was a measure of composure within the team. The belief that we haven’t had a good start given what happened last year and given the talent that we have in the squad, if we continue to play aggressively then we can pose problems as the tournament progresses.

“It’s always nice to get that first win under the belt and looking forward to the next couple of games before we head home for a few games. It is important that we continue that momentum,” he said.

Impressed with the quality of bowlers in the MI squad, Bond said that the team has a good mix of youth and experience.

“We have got really good bowlers in the side. We have got very experienced bowlers like Vinay Kumar and we have bowlers who are in their first and second season. So for me first it’s learning about these guys and the areas that they need to improve on.

“From my point of view I just try and make the guys clear in what they are going to do on the field. They are bowling against some fine batsmen. And the confidence to go out there and execute their skills,” he said.

But Bond, who is part of a star-studded MI coaching staff including Ricky Ponting, Sachin Tendulkar, Anil Kumble and Jonty Rhodes, admits the team hasn’t played to its potential.

“I think we haven’t put a complete performance together. We have done well in short periods of time and I thought in the last match we were as good as we have been. In the last ten overs we were exceptional and summed up the conditions well.”

“We were put under pressure and we would have liked to be much better but we know that as a group we are striving for that performance. It’s a lot about eliminating the easy boundaries and if we do that with the quality of bowling we can certainly make life difficult for the opposition batsmen,” he said.

“He really bowled well upfront. He bowled exactly how we wanted him to do. Little bit rusty at the back end of the innings, but I think you expect that form a bowler who hasn’t bowled for 6-8 weeks.

“If Mitch gets another chance in the next game he will certainly be better. He is someone who certainly will not back off the challenge and will come out even harder in the next match,” he concluded. 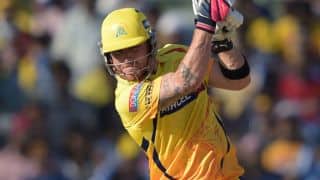