“I always go for wickets as a leg-spinner. I never think of containing the batsmen because that does not work. The moment you think of containing the batsmen then you become defensive. You may go for runs as well when you bowl to take wickets but at the same time you can only win the matches by taking wickets,” Chawla told post-match news conference at the Eden Gardens.

Chawla’s first spell read 2-0-23-1, but he turned it around in the last spell taking the wickets of Kedar Jadhav (10) and Yuvraj Singh in one over.

“It’s about how strongly you come back if you go for runs in the first two overs. At that time I was planning to get some wickets. That’s the only thing through which I could contain the batsmen. They were taking their chances especially against me. I knew they would look to go after me and I just needed to bowl in good areas.” Duminy admits IPL 2015 is over for Delhi Daredevils after loss to Kolkata Knight Riders

Chawla also showered praise on fellow spinner Sunil Narine, who was included in the side after being cleared by the Board with a final warning. “We all know how good a bowler he is. We can all see how strongly he came back after the ups and downs. He’s a class act,” he said on Narine who returned wicket-less giving away 30 from his full quota of four overs. Sunil Narine cleared to bowl by BCCI with a final warning

The humid conditions made it difficult to grip the ball but Chawla said “it was not much of a difficulty.” The match was played on a fresh strip and it appeared slower but Chawla said there was something in it for the batsmen as well. PHOTOS: Kolkata Knight Riders vs Delhi Daredevils IPL 2015, Match 42 at Kolkata

“Most of the tracks are very good for batting. This one was a little bit on the slower side. It was not turning that much. You still need to bowl in good areas to get the wickets,” Chawla said.

On being promoted to No 4, the left-hander who hit 22 from 19 balls (1×4, 1×6) said it was a decision to tackle their legspin duo of Amit Mishra and Imran Tahir. “We just wanted to have a left-hander in when the two leg-spinners were bowling. The only plan was to take chances against the legspinners but they took them out of the attack after the first two-three balls I faced.” Kolkata Knight Riders vs Delhi Daredevils, IPL 2015 Match 42: Highlights 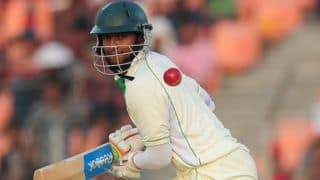 Bangladesh all out for 203, Pakistan do not enforce follow on