Brad Hogg was the pick of the bowlers for KKR against CSK.

Brad Hogg became Indian Premier League‘s (IPL) oldest player at 44 years and 81 days, when he took the field for Kolkata Knight Riders (KKE) against Chennai Super Kings (CSK) in IPL 2015 on Tuesday. Hogg believes Kolkata were at a good stage in their pursuit to get 135 but the spells of R Ashwin and Ravindra Jadeja changed the course of the match. Brad Hogg becomes the oldest player to play IPL during KKR vs CSK, match 28 of IPL 2015

“The way Ashwin and Jadeja bowled in that middle period really put us on the backfoot. We have to make sure that we don’t take our pedal off the mettle when we are ahead in the run-rate. At one point we needed run-a-ball but we missed those opportunities to just tick the strike over and play with ones,” said Hogg, according to iplt20.com. IPL 2015: Kuldeep Yadav hopes to inspire many for chinaman bowling

Hogg also believes that he is very lucky to be playing cricket at his ripe age. “It is amazing to be back playing in the IPL. I am just fortunate to be still playing at my age. I have had a stop-start career and it has been a bit of a fairytale to still keep going. My team mates at KKR are a great bunch of blokes and I am enjoying being a part of it all,” Hogg added. Sunil Narine banned by BCCI from bowling off-spin in IPL 2015

Asked if he enjoyed the challenge of bowling to cricketers like Suresh Raina, he said, “I really enjoy bowling to Indian batsmen because they really test your craft. In the last 20-30 years there hasn’t been an Australian spinner who has come here and dominated the batsmen. It is good to test your skills against the best and that is why you play the game.” IPL 2015: Kolkata Knight Riders eager to get back to winning ways against Chennai Super Kings 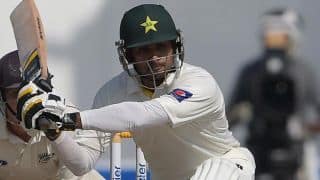