Narine underwent fresh test on his bowling action in Chennai on Thursday.

Kolkata: Sunil Narine might be out with a suspected bowling action but Kolkata Knight Riders (KKR) batsman Robin Uthappa feels the beleaguered mystery spinner would come back stronger to form a lethal combination with Brad Hogg in the coming Indian Premier League (IPL)2015 matches. In his absence, Hogg has claimed five wickets in two matches. KKR look to continue winning momentum against RCB

Architect of KKR’s title triumphs in 2012 and 2014, Narine underwent fresh test on his bowling action in Chennai on Thursday after the Board of Control for Cricket in India (BCCI) banned him from bowling the off-breaks. Robin Uthappa glad KKR have bounced back with a win against CSK

KKR opener Uthappa said it is a difficult phase for the bowler but insisted that Narine is an extremely hardworking and resilient character. Royal Challengers Bangalore vs Kolkata Knight Riders, IPL 2015 Match 33 Preview

“We’re a very tight-knit unit and it definitely leaves us confused. He’s someone who adds so much of value to the side. We respect his skills and his contribution to the team immensely. We definitely miss him but we’re confident that he’ll come through this stronger,” Uthappa told a post-match news conference at Eden Gardens.

Narine is expected to join the side when it travels to Bangalore on Friday. Amid the turmoil, Australian veteran Hogg, who was drafted in place of Narine, lifted KKR’s morale with stunning performances of 1 for 18 and 4 for 29.

Uthappa said both the bowlers are very different and could be deadly if they bowl in tandem.

“They are like chalk and cheese. Hogg is a very different bowler. There’s a massive difference between them but they are equally effective. It’s a good replacement. It’s good to have him at hand when we miss someone like Sunil. But if they’re both together it would have been an extremely lethal bowling attack,” he said.

Showering praise on the Australian, Uthappa said the 44-year-old brought in an air of positivity to the side.

“Hogg brings in a lot of good energy into the side. He’s an extremely funny character. It’s unimaginable for a 44-year-old to have that kind of energy. Some of us find it difficult to keep up with him. He’s lot of fun on the field and keeps fooling around, He’s definitely the prankster in the unit. When it comes to the skill, he’s very effective and brings in his experience and positivity. He exactly knows what he’s doing,” he said. 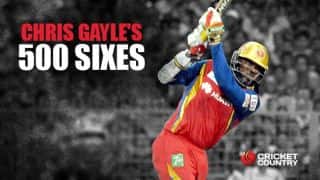