Rohit Sharma backed his openers Lendl Simmons and Parthiv Patel, saying it is just a matter of time before they score big runs in the Indian Premier League (IPL).

Mumbai: Mumbai Indians skipper Rohit Sharma on Thursday backed his openers Lendl Simmons and Parthiv Patel, saying it is just a matter of time before they score big runs in the Indian Premier League. “I don’t think our openers haven’t clicked. They haven’t scored big runs. But in the last few games we have got 40-45 runs in the first six overs,” Rohit said ahead of their match against Rajasthan Royals at the Wankhede Stadium here on Friday. Mumbai Indians vs Rajasthan Royals, IPL 2015 Match 32 at Mumbai Preview

“As a team we are happy with the starts they are giving us. Against Delhi, Bangalore and Sunrisers we got off to decent starts but the middle-order didn’t capitalise. They are doing well. We need to keep backing them, continue to show immense faith in them. The big runs are around the corner.” Wicketkeeper-batsman Patel has got scores of 16, 0, 12, 28, 17 in the 2015 season while the West Indian has scored 5, 59, 15, 51. Rohit Sharma: The often forgotten story of the batsman’s rise

“Lendl Simmons has scored two half-centuries already in the last four games and Parthiv Patel has got off to good starts, but has not converted them into big runs. He has played enough cricket and he understands that. Tomorrow might be the day for him.” Royals have several players in their squad who belong to the Maximum City — Ajinkya Rahane, Pravin Tambe and Dhawal Kulkarni.

Asked if Royals would have an added advantage on Friday with the players knowing the conditions well, Rohit said: “In IPL, players from certain cities have gone and played for a different franchise before also. We know their strengths and weaknesses. They know our strength and weaknesses. That doesn’t make much of a difference. “Conditions will play a part as they have played all their cricket here in this ground. It won’t affect too much on the game. As a captain I also know what their weaknesses are on this wicket,” he said. IPL 2015: Ben Hilfenhaus to replace Aaron Finch in the Mumbai Indians squad 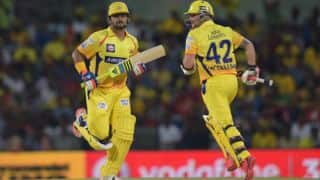