RCB geo off to the best possible start after they beat KKR at Eden Gardens.

Known to be under-performers despite boasting of devastating batsmen like Chris Gayle and AB De Villiers, the Virat Kohli-led team will look to capitalise on the home advantage in their next three games before they embark on away games. Gayle, who created a storm with his match-winning innings of 96 against KKR, will be eager to be at his explosive best in front of home fans too. IPL 2015: KC Cariappa admits that he was his nervous during his IPL debut for KKR vs RCB

In fact, the entire batting line-up of RCB is capable of striking fear into the opposition attack. In skipper Virat Kohli and South African swashbuckler A B de Villiers, RCB have the most destructive top-order on paper. Dinesh Karthik is capable of lending the stability that the volatile line-up needs even though he failed in the opening match against Kolkata Knight Riders. Virat Kohli: Win against KKR in IPL 2015 one of RCB’s better wins

Karthik, who was bought for a whooping Rs 12.5 crore in the IPL 2015 auction, will be keen to prove his critics wrong with something special as he did when playing for Mumbai Indians previously. In the absence of Mitchell Starc and New Zealand recruit Adam Milne, the hosts bowling looks a tad weak. Sean Abbott was the most expensive among RCB bowlers against KKR as he gave 36 runs in three overs with an average of 12 runs per over. PHOTOS: Kolkata Knight Riders vs Royal Challengers Bangalore, IPL 2015, Match 5 at Kolkata

Abbott and Varun Aaron will make efforts to improve their bowling to fill the gap left by Starc and Milne. RCB also have Indian lad Ashok Dinda to spice up the pace bowling, but it remains to be seen whether he would be picked. The spin department is being handled by Yuzvendra Chahal, who would like to continue his form after he finished with figures of one for 29 in four overs. Kolkata Knight Riders vs Royal Challengers Bangalore IPL 2015: Highlights

On the other hand, Sunrisers will be looking to put up an inspiring effort to beat the formidable Royal Challengers. With Shikhar Dhawan, the lone Indian star in the team, the onus will be on foreign players, who had an average game in the last encounter. Ravi Bopara and Kane Williamson did not do enough and will be eager to contribute against the hosts. After receiving flak for not batting up the order, Williamson will look to promote himself by showcasing his batting abilities. Chris Gayle’s match winning knock against KKR is his mother’s ‘Birthday Gift’

The decision to hold Williamson back till the very end was questionable. Sunrisers will be hoping for the return of pace spearhead Dale Steyn, without whom Ishant Sharma and Karn Sharma looked out of sorts against Chennai. CSK vs SRH IPL 2015: Nice to get the nod ahead of Dale Steyn, says Trent Boult 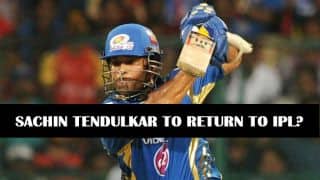