Royal Challengers Bangalore are in second spot in the league table with 15 points from 13 games.

RCB have been inconsistent in the tournament but the Virat Kohli-led side are very much in contention for a playoffs berth. They are in second spot in the league table with 15 points from 13 games, behind Chennai Super Kings (CSK), who are on 16 points from 13 matches.

The home side would not want to depend on the complex permutations and combinations and would simply look to beat the Delhi side on Sunday at the Chinnaswamy Stadium to qualify for the playoffs stage. Virat Kohli admits to being nervous during RCB-SRH thriller

Delhi, on the other hand, are already out of reckoning with just 10 points from 13 games and they will play for pride only.

RCB’s batting trio of captain Kohli, AB De Villiers and Chris Gayle have been among the runs and that aspect makes them the favourites to win Sunday’s match. Virat Kohli, Dinesh Karthik get into a heated argument with umpires

Gayle’s 35 and Kohli’s unbeaten 44 were instrumental in RCB snatching a thrilling six-wicket victory over SRH with a ball to spare under Duckworth/Lewis method on Friday night after the target was revised to 81 off six overs in the 11-over-a side match.

De Villers made an unbeaten 133 which helped RCB post a stupendous 235 for one in 20 overs against Mumbai Indians (MI) at Wankhede Stadium earlier this week. RCB will want one of the trio to score big against Delhi on Sunday.

On the bowling front, RCB will look towards Mitchell Starc to cause damage to opposition batsmen — especially early on — and dry the flow of runs.

Delhi, in contrast, lie second from the bottom after losing eight of their 13 matches. Delhi’s campaign has been a nightmare but one factor that might spur them tomorrow is that they are coming into the match with a win against Chennai and they have nothing to lose after being out of contention for playoffs.

Delhi had notched up a comprehensive six-wicket win over table-toppers Chennai in their last encounter in Raipur with opener Shreyas Iyer hitting an unbeaten 70 and veteran pacer Zaheer Khan leading a brilliant bowling show.

Nothing seems to have worked for Delhi this season with multi-crore buy Yuvraj Singh being their biggest batting flop. His lacklustre show in the middle-order has hurt Delhi badly even though captain JP Duminy and opener Quinton de Kock have also been disappointing.

On the bowling front, although veteran pace spearhead Zaheer has managed decent figures since returning from injury, Delhi’s attack has lacked the necessary sting. 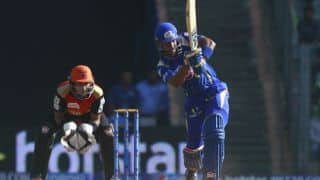