Buoyed by the win against table-toppers Chennai Super Kings (CSK), Sunrisers Hyderabad (SRH) coach Tom Moody said his team still has quite a distance to go and will need to continue the momentum in its remaining games. “We have got lot of hard work ahead of us. This is just one step towards where we want to be, that’s the final four. Kolkata Knight Riders vs Sunrisers Hyderabad, IPL 2015, Match 38 in Kolkata: Preview

It’s an important step. The next one against Kolkata Knight Riders (KKR) is equally important. The conditions are going to be very different from what we experienced today,” he said after SRH scored a 22-run victory over CSK here last night.

Moody complemented captain David Warner, whose 61 runs laid the foundation for SRH’s competitive total of 192, which CSK could not chase. “He [Warner] has batted exceptionally well throughout the tournament. Again today, he set the pace for us with the bat. He plays fearlessly. He plays smartly. He puts pressure on the opponent. He, along with Shikhar [Dhawan], consistently sets up a good platform to launch from,” he said. Sunrisers Hyderabad vs Chennai Super Kings, IPL 2015 Match 34 Highlights 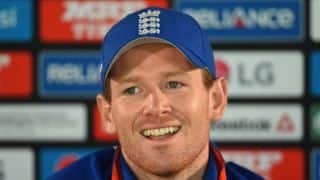