Moody stated that the Duckworth-Lewis rules "needed to be looked at".

Hyderabad: Sunrisers Hyderabad (SRH) coach Tom Moody has expressed unhappiness at the way the target for Royal Challengers Bangalore (RCB) was revised under Duckworth-Lewis method in their rain-interrupted Indian Premier League (IPL) match and said that the system “needs to be looked at”. READ: RCB pull off thrilling six-wicket win vs SRH

“We had to play regardless of the weather. Because, one point made no difference to us and still disillusioned how D/L method comes up with the numbers that they come up with. When you score a total in 11 overs, you face three powerplay overs, then you have a rain interruption and you have to defend with six overs with two powerplay overs,” Moody said at the post match press conference last night. READ: RCB vs SRH, Match 52 Highlights

“I am not the anyone, but it has been talked about for a fair period of time. Personally, I feel that it [D/L method] definitely needs to be looked at. Because, there is an imbalance there. You don’t want rain interruption period. You also don’t want skewed games with huge disadvantage like that,” Moody said. READ: Virat Kohli admits to nervousness during RCB-SRH match

After a delayed start due to rain, Sunrisers Hyderabad scored 135 for 3 in 11 overs. But the target for RCB was revised to 81 from six overs after their run chase was also delayed by rain. A superlative performance of 35 runs in just 10 balls by Chris Gayle and unbeaten 44 runs in 19 balls by captain Virat Kohli helped Bangalore to record a six-wicket victory with one ball remaining under D/L method. READ: Virat Kohli, Dinesh Karthik get into heated argument with Kumar Dharmasena

Moody said each and every player of his side has done his best under the circumstances in the match.

“I am not going to apportion blame to any particular player. I thought every player did their very best under the circumstances,” he said. READ: Chris Gayle celebrates RCB victory in own style

Stressing that his team now needs to win tomorrow’s match against Mumbai Indians (MI) to make it to the play-offs, he said he would like to keep focused on the task at hand. IPL 2015 Highest wicket-taker: List of best bowlers in IPL 8

“Our focus now is on winning the match against Mumbai on Sunday. This [match against RCB] is a game that was thrown into extraordinary situations. This is a game that we would have liked to take two points. We just take positives from it and make sure that we play our very best in the last,” said the Australian. IPL 2015: Schedule with venue details

Replying to a query, Moody said it is always a challenge, especially in a six-over contest, to deal with the top three batsmen that Bangalore have got — captain Virat Kohli, Chris Gayle and A B de Villiers. IPL 2015: Points Table and Team Standings

Moody was lavish in his praise of his all-rounder Moises Henriques, who made 57 runs in 22 balls, for his brilliant performance.

“Exceptional. He (Henriques) bowled well. Batted exceptionally well. He is a quality all-rounder, which he has shown throughout the tournament,” he said. IPL 2015: Complete Coverage

Meanwhile, RCB coach Danier Vettori was pleased with his team’s win as its keeps the team in contention for a play-off berth.

“To get a win in a pressure situation, it is always satisfying,” he said.

Appreciating the effort made by Sunrisers Hyderabad team to make a challenging total of 135/3 in 11 overs, he felt that the reduction in target due to rain probably helped his team.

“It probably did work in our favour, the reduction (in target),” he said. 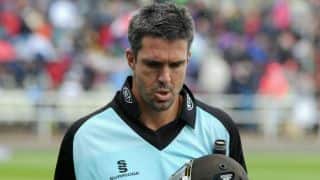