Trent Boult had an ordinary debut in IPL 2015.

New Zealand fast bowler Trent Boult on Monday said the biggest challenge for him in Twenty20 cricket is to out-think the batsmen. “The difference between Tests and the shorter format is that batsmen are coming at you a lot more and looking to attack against your deliveries. My thinking has to be much quicker and I have to plan to be ahead of the batsmen as much as I can. That can sometimes get very difficult but that’s probably the biggest challenge,” Boult was quoted as saying by ESPNcricinfo. IPL 2015: Great to have David Warner as Sunrisers Hyderabad captain, says Dale Steyn

The joint highest wicket-taker of the 2015 World Cup and ranked sixth in Tests and One Day Internationals (ODI), Boult was roped in by Sunrisers Hyderabad for Rs.3.8 crore for the Indian Premier League (IPL) two months ago. The left-armer says there is not much pressure on him and he hopes to enjoy his time in India. CSK vs SRH IPL 2015: Nice to get the nod ahead of Dale Steyn, says Trent Boult

“I don’t think there is too much pressure. I enjoyed the World Cup immensely but I don’t think the pressure beats me and I’m not worried about the expectation and all that. If I can put that aside and just enjoy being here, that will bring out the best in me,” said the seamer. CSK vs SRH IPL 2015: Trent Boult, Kane Williamson will get better as IPL 8 progresses, says brendon McCullum

Asked how he would tackle the batsmen-friendly T20 cricket in IPL, Boult said: “I try not to think about it too much. It’s part of the game. In T20 cricket you are going to get hit for boundaries and sixes. “How quickly you can put it behind you, how quickly you can come back and hopefully take some wickets. I know it’s easier said than done but the best players in the world have their ways to get through that.” IPL 2015: Great to have David Warner as Sunrisers Hyderabad captain, says Dale Steyn

The 25-year-old said his success in IPL will depend on how quickly he can acclimatise and adapt to the wickets. “It was pretty helpful to be in our home conditions which us as a team, us as bowlers we were familiar with. We knew what lengths to bowl and what lines. The grounds we played at, the ball swung nicely but I guess the challenge is to come to India — much different climate, much different environment and very different wickets,” he said. Trent Boult: Hope conditions in IPL 2015 will help my swing bowling

“The ball will swing here, just won’t be the same as back in New Zealand. So we have to quickly adapt to that and make sure my line and length is right and I’m hoping that I can be tricky for the batsmen,” he concluded. 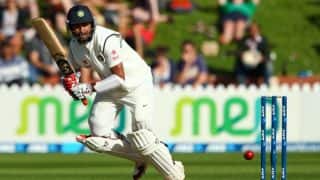 Cheteshwar Pujara dismissed for duck on debut for Yorkshire against Worcestershire