“It was a good game for us. Mitchell Johnson bowled and batted well, credit of the victory should go to Mitchell and Axar,” Sehwag told reporters after Kings XI Punjab defeated Rajasthan Royals in a pulsating ‘Super Over’ contest.  Chasing 192, Punjab spinner Patel blasted a four of the last ball to take the game into a tie. READ: Watson, Smith and Faulkner were the right batsmen to play the super-over

“Today, luck favoured us but in next games, we will focus on good cricket rather than depending upon luck,” Sehwag said.

“Glenn Maxwell was in good form in previous IPL, but this time his form is concern for the team,” Sehwag said adding that he will soon come back to form. READ: Kings XI Punjab confident of beating Chennai Super Kings

Rajasthan’s Chris Morris, who bowled the super over, said the score of 192 was not easy to chase. Morris said he was bowling in a Super over for the first time but he did not feel any pressure. The South African pacer also praised Ajinkya Rahane, describing him as one of India’s best player, whose good form will help Rajasthan. IPL 2015: Schedule with venue details

When asked whether they will try the bench-strength of the team, Morris said the decision will be finally taken by the team management, but all the players are doing pretty well in the nets and they can take the players, who have not played yet in next games. IPL 2015: Complete Coverage 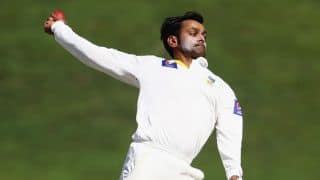