Mumbai Indians will look to get back to winning ways at home.

Mumbai: Ahead of their match against Mumbai Indians, Sunrisers Hyderabad (SRH) team mentor VVS Laxman heaped praise on skipper David Warner on Friday saying the Australian, as a senior squad player, has taken lot of responsibility and has been fantastic in the ongoing Indian Premier League (IPL) 2015. IPL 2015: MI vs SRH clash to be witnessed by 17,000 underprivileged children

“Warner has been fantastic. We have given him the captaincy because of the way he contributed as a leader in 2014. Even though he was not the designated captain, he was contributing in every team meeting. As a senior player he took a lot of responsibility,” Laxman said at a pre-match press conference here, ahead of his team’s match against Mumbai Indians (MI) on Saturday. Mumbai Indians vs Sunrisers Hyderabad IPL 2015, Match 23 at Mumbai Preview

“In Australian Big Bash Twenty20 league, the opportunities he got he did well. Since the first match this season he has been very good. He has got immense respect within the group. He has also become matured as a player and as a person,” he said. Dale Steyn issues ‘sensitive’ advice for relationship

When asked if pacer Ishant Sharma would get the opportunity to play against Mumbai, the 40-year-old said,” Ishant played the first game but unfortunately he bowled a lot of no balls. But he has worked hard over the last one week. But Praveen Kumar has got the opportunity and he did really well.” PHOTOS: Sunrisers Hyderabad vs Kolkata Knight Riders, IPL 2015: Match 19 at Hyderabad

“We want look at playing the best possible eleven, depending on the conditions,also looking at the opposition we play against. It’s unfortunate that Ishant has missed out but Praveen has bowled well. But Ishant has been working really hard with the group,” Laxman said. Sunrisers Hyderabad trump Kolkata Knight Riders in rain-affected IPL 2015 Match 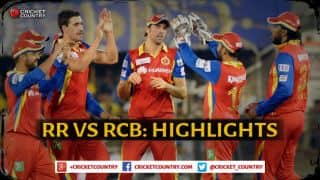