Sunrisers Hyderabad (SRH) team mentor VVS Laxman said on Friday that he supports the concept of “Super Over” in T20s as it excites the crowd and enables a team to get a result in case of a tie, negating the possibility of shared points. Kings XI Punjab (KXIP) defeated Rajasthan Royals (KXIP) via Super Over in an Indian Premier League (IPL) match at the Sardar Patel Stadium in Ahmedabad on Tuesday. Mumbai Indians vs Sunrisers Hyderabad IPL 2015, Match 23 at Mumbai Preview

SRH face Mumbai Indians (MI) at the Wankhede Stadium on Saturday. The visitors come into the match after a 16-run win over defending champions Kolkata Knight Riders (KKR) in a rain-affected match via the Duckworth-Lewis (D/L) method on Wednesday. “It’s good to have a Super Over, because at the end of the match you want a result. You don’t want teams to share points. It’s exciting and also has something for the crowd,” Laxman said at the pre-match press conference. IPL 2015: VVS Laxman praises David Warner ahead of Sunrisers Hyderabad vs Mumbai Indians

“It is also not time consuming, it’s equal to both the teams. It’s not something which favours just one team. I favour it more than the bowl out. In bowl out one can be unlucky sometimes,” he said. Their opponent Mumbai Indians have lost five out of six outings so far in the ongoing season. Batting has been a problem for Mumbai in the season, specially at the beginning of an innings. IPL 2015: MI vs SRH clash to be witnessed by 17,000 underprivileged children

When asked if Hyderabad’s fast bowling duo Dale Steyn and Trent Boult would both be in the squad on Saturday to outclass the Mumbai batsmen, the 40-year-old said: “That’s a possibility. But let us see how the wicket is on Saturday. We haven’t taken any decision yet on the playing eleven. On Saturday we will take the final call.” Dale Steyn issues ‘sensitive’ advice for relationship

The former Indian batting great said despite the home side being in poor form, Hyderabad are no taking Mumbai lightly. “Mumbai didn’t play to their potential till now, but they have got a dangerous batting line-up. They have got match winners in them. It’s important for us to focus on what our strengths is and what we have to do right to have the right result on our side,” Laxman concluded. Sunrisers Hyderabad trump Kolkata Knight Riders in rain-affected IPL 2015 Match 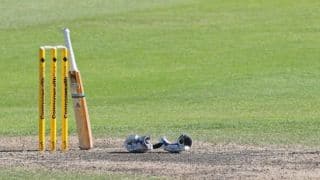 BCCI technical committee meeting to discuss issues relating to scheduling of matches, quality of pitches among others