IPL 2016: 150 turned away for carrying 'fake' tickets at IPL match in Mumbai
By Press Trust of India

Mumbai: As many as 150 people were turned away for carrying fake tickets at yesterday’s Indian Premier League match between Mumbai Indians and Kolkata Knight Riders  at the Wankhede stadium here. An official from Mumbai Indian team said that the booking staff and the security at Gate Number 4 found 150 people with “unauthorised” tickets. These tickets were of Sachin Tendulkar Stand, Level 111 and cost between Rs 1500-2000. “The franchise takes utmost precaution on the ticket quality control. Yesterday’s incident was unfortunate,” he said. “We urge the fans to always buy genuine tickets from authorised points of sale — Book my Show, Reliance outlets and the counter at Gate number two of the stadium,” the official said, adding those with fake tickets had bought them from “unauthorised people”.  FULL CRICKET SCORECARD: Mumbai Indians vs Kolkata Knight Riders, IPL 2016, Match 24 at Mumbai

An FIR has been registered against unknown persons for cheating and forgery at Marine Drive police station based on the complaint filed by five people who were not allowed to enter the stadium, a senior police official said. FULL CRICKET UPDATES: Mumbai Indians vs Kolkata Knight Riders, IPL 2016, Match 24 at Mumbai

Earlier, Indian fans are ecstatic about cricket and like every other fan a guy named Faisal was anxious about watching the 24th game of the Indian Premier League (IPL) between Mumbai Indians (MI) and  Kolkata Knight Riders (KKR) at Wankhede Stadium on Thursday. But things didn’t turn out the way he would have hoped for Faisal and couple of his friends as they were fooled and misled by a man who claimed to be a ticket seller right outside the stadium on Thursday evening. In a conversation between CricketCountry Staff  and a close friend of Faisal named Wasim, some shocking things were revealed which will leave any cricket fan bewildered and make him think twice before buying an IPL ticket from anywhere rather than the counter. 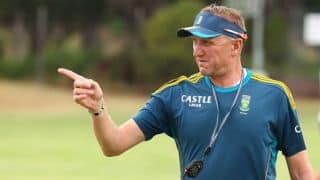 Pakistan likely to declare new coach on May 3