The glitzy Indian Premier League (IPL) in its ninth edition recorded a 22 percent growth in its last week on Sony Max, Sony Six and Sony ESPN, a company release said on Thursday. Also there were 357 million viewers who witnessed the tournament, establishing it as the biggest television event in India. The IPL in its ninth season broke all the viewership records. Despite fan favorites Chennai Super Kings and Rajasthan Royals suspended, the new entrants — Gujarat Lions and Rising Pune Supergiants — got a thumbs up from the audience. While early on it seemed the tournament may be dull due to the one-sided matches, later on crowd got enthralled thanks to some nail biting finishes, none more so than Delhi Daredevils and Gujarat Lions fixture. ALSO READ: IPL 2016 and the unusual flow of emotions

“(A total of) 357 million viewers watched the IPL, establishing it as the biggest television event in India today,” said the release. The highest-rated match in the 2016 edition of the IPL was the May 24 Qualifier I clash between Royal Challengers Bangalore and Gujarat Lions which saw a cumulative viewership of over 100 million.

The IPL 2016 saw a new champion as Sunrisers Hyderabad claimed their maiden IPL title. They beat the outright favorites Royal Challengers Bangalore in the final by 8 runs. The highlight of this season’s IPL was the batting display from Virat Kohli and David Warner. Both the batsmen shattered records left and right, and now stand 1st and 2nd for leading run-scorers in a single IPL campaign. Kohli scored an unbelievable 973 runs, which broke the 733 run record held by Chris Gayle and Michael Hussey. And soon, Warner followed suit by amassing 848 runs. 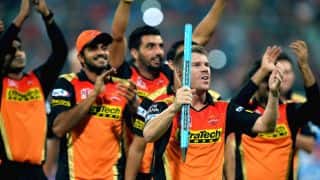