South Africa speedster Dale Steyn took a taste of street cricket in Mumbai registering his ‘first wicket’. He seemed to enjoy playing bare footed with youngsters bowling a kid out. Steyn is here to play for Gujarat Lions (GL) in the ninth edition of Indian Premier League (IPL). He hasn’t had an opportunity yet to play in the IPL, as the Gujarat team looks sorted with three consecutive wins so far in the tournament. The new franchise led by Suresh Raina, has been in a tremendous form and the skipper is highly unlikely to change the winning combination. Live Cricket Scorecard: Sunrisers Hyderabad vs Mumbai Indians, IPL 2016 Match 12 at Hyderabad

He posted the video of him playing with the kids with a caption my first wicket of the IPL . His team lost the two of the three matches they have played in the tournament. They managed to register their first win against Mumbai Indians quite comfortably with the help of Australian Opener David Warner. They are now standing sixth on the IPL Points table and would look to pave their way through to the top four at the end of league stages. FULL CRICKET SCORECARD: Sunrisers Hyderabad vs Mumbai Indians , Live Score, 12th T20 Match, IPL 2016

Here is the video that Steyn posted for his Instagram followers:

Little bit of street cricket in Mumbai, my 1st wicket of the Ipl

Gujarat Lions’ latest victory came against Mumbai Indians (MI) as the bowlers first restricted the reigning champions for a mere 143 at Mumbai’s home ground and later chased the runs down with ease. 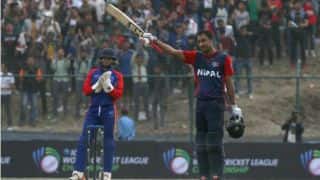