No batsman in IPL 2016 has hit more boundaries than David Warner.

David Warner is dead serious about his cricket these days and now it is captaincy that he has set his eyes upon, Ravi Shastri heaped praises on the Sunrisers Hyderabad’s skipper, who has been very impressive in the Indian Premier League (IPL) 2016 with both bat and as a captain. “His creased brows and intent gaze tell you of a bloody-minded intent. Warner is worth our attention. He played for Australia before he had played a single firstclass game. He won and lost a Test berth not for his runs, but for what he made headlines with in a bar brawl,” the former Indian cricketer added. FULL CRICKET SCORECARD: Rising Pune Supergiants vs Sunrisers Hyderabad, IPL 2016 at Visakapatnam

“His sure-footedness now offers its own defence. Unfailingly, he has seized an early initiative for Hyderabad this IPL. His methods have also freed up Shikhar Dhawan who’s fancying himself as a finisher these days.Between these two, skids and bumps of an innings are easily absorbed,” he added.

According to Shastri’s column in the Times of India, he went on compare Warner’s aggressive approach to the game to the likes of Matthew Hayden and Virender Sehwag. “He applied correctives, rebounded and is as feared on the circuit as Hayden and Sehwag once were, not very long ago,” Shastri wrote. READ: IPL 2016: Shikhar Dhawan praises David Warner for easing pressure on him

The former Indian skipper also indicated the fact that Warner has the best strike-rate in this ninth edition of IPL. “Ni batsman has hit more boundaries than Warner. Not even Kohli. We haven’t yet seen the switch-hit that once earned him a double-sided bat endorsement. This abstinence may be out of respect to the cares of captaincy. But Warner remains wild at the crease, a ball-shredder if ever there was one,” Shastri added. 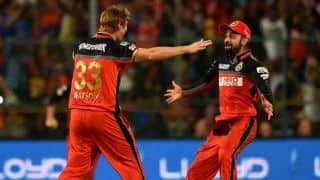