David Warner and Shikhar Dhawan have been one of the most successful opening pairs in IPL.

The pair of David Warner and Shikhar Dhawan become the first opening pair to register 700 runs in a single edition of an Indian Premier League (IPL) season. The duo had put on 622 runs in the earlier edition of the cash-rich tournament. Warner and Dhawan achieved this feat during the IPL 2016 final playing for Sunrisers Hyderabad (SRH) against Royal Challengers Bangalore (RCB) at M Chinnaswamy Stadium in Bangalore. The pair now have 731 runs opening the innings. Warner also became only the fourth overseas player to play 100 IPL matches. Warner has been in excellent form this season and has also gone past the 800-run mark this season. Full Cricket Scorecard: Royal Challengers Bangalore vs Sunrisers Hyderabad, IPL 2016 Final

He becomes only the second player in the history of the tournament to score 800 runs in a single edition of IPL after Virat Kohli, who is on the verge of completing 1,000 runs this season. Both RCB and SRH are chasing their maiden IPL title in this match. Full Cricket Updates: Royal Challengers Bangalore vs Sunrisers Hyderabad, IPL 2016 Final

Earlier, it was SRH, who had won the toss and elected to bat first. SRH welcome back Mustafizur Rahman in this game in place of Kiwi fast bowler Trent Boult. Mustafizur had missed out playing the previous match against Kolkata Knight Riders (KKR) due to an injury. RCB on the other hand have named an unchanged side. Warner and Dhawan have been in good form throughout the tournament, but it is the SRH skipper, who has played some useful innings throughout the IPL. His unbeaten 93 not out against KKR in the Qualifier 2 is perhaps one of his best innings in T20s. 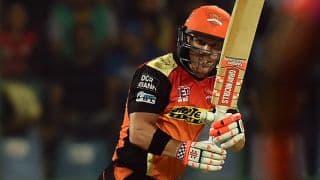