David Miller also said it was a low-scoring game.

New Delhi: Kings XI Punjab skipper David Miller heaped praises on Amit Mishra stating that the leg-spinner was “unlucky” not to end up with a five-for after having changed the course of the game with wickets of him, Shaun Marsh and Glenn Maxwell. Mishra’s 4/11 in 3 overs was instrumental in Daredevils notching up a comfortable eight-wicket win over Kings XI Punjab. “Mishra was unlucky not to get five wickets. He is a great bowler, he got myself, Maxwell and Marsh as well, so he has been a game-changer out there,” Miller told reporters after their second loss. FULL CRICKET SCORECARD: Delhi Daredevils vs Kings XI Punjab, IPL 2016, Match

Not ready to blame the Feroz Shah Kotla wicket, Miller said:”It was a low-scoring game but I think we lost too many wickets in different stages which changed the momentum of the match. I think the wicket was right.” Asked why didn’t he introduce Glenn Maxwell early in the innings, Miller said:”I didn’t want the bowlers to bowl too many overs at once. We didn’t have enough runs on board. I thought I will bring Maxwell later on but then they won the game. So yes, Maxwell’s over was a bit too late. He could have come early. I guess we need to chop it up.” FULL CRICKET SCORECARD: Sunrisers Hyderabad (SRH) vs Kolkata Knight Riders (KKR), IPL 2016 Match 8 at Hyderabad

Both Miller and Maxwell were dismissed in the same over by Mishra and the skipper admitted it was a painful coincidence. “Mishra was bowling really well. But as trump batters, we needed to express ourself and play with freedom as well. There is a very fine line between batting with irresponsibility. I give credit to them. I guess we need to chat about that in the next couple of days,” he said. “It (Maxwell’s shot) was not needed at that time to be honest. But then if Max would have hit a six then we would have been praising him. So may be at that stage he though he needed to take him on at that stage. He just missed the ball. It was a Catch-22 situation.” Delhi Daredevils vs Kings XI Punjab, IPL 2016: David Miller’s wicket was the turning point, says Amit Mishra

Miller said he would look to stick to what worked for them in the past and hoped that they will back to winning ways soon. “It doesn’t change. I thought to go with the same mind set, same process, stick with the things that I did in the past. I have been hitting the ball nicely and as a batsman, I believe we need to stick to what worked in the past.” Asked about Zaheer Khan’s spell, Miller said:”Zaheer bowled really well today, they started well and put us under pressure. We were in the back foot. We finished well with our tail enders and that is one positive we can take from the match. Hopefully, we will come good in next match.” 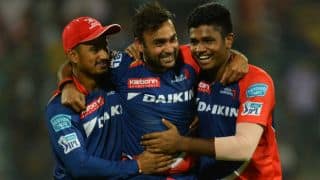