The new franchises will play the next two editions of IPL.

Pune and Rajkot, the new Indian Premier League franchises, can pick five players each from the Chennai Super Kings and Rajasthan Royals, who currently are serving a ban from IPL for two years. In 2018, the suspended franchises will be back in the league and IPL will continue its eight-team format. The 10 players will be picked through a draft system from a pool of 50, with the remaining names going under the hammer. The original retention rule of picking a maximum of four Indian capped players will be applicable for the new franchise as well. The likes of MS Dhoni, Ravichandran Ashwin and Suresh Raina who have been associated with Chennai Supers King right from the inaugural season will play for a different side for the very first time. READ: IPL 2016 auction: All you need to know about reverse bidding

Two new franchises to have draft picks on December 15. Pune will get to pick the players first.

The Chennai side who is one of the most successful teams in the IPL so far, winning it twice with MS Dhoni being the skipper in all the eight editions of the league also featured other big names like Brendon McCullum, Dwayne Bravo, Ravindra Jadeja and Faf du Plessis.

On the other hand, Rajasthan Royals who were managed by Indian former skipper Rahul Dravid also had managed to form a balanced side in the recent times. RR who managed to make the play-offs twice in the last three seasons have players international players like Ajinkya Rahane, Shane Watson, Steven Smith, James Faulkner, Tim Southee, Stuart Binny and Sanju Samson.

The new franchises—Pune was bought by Kolkata-based business tycoon Sanjiv Goenka’s company New Rising, while the Rajkot bid was won by Intex Mobiles. While Goenka will shell out Rs 10 crore per year to the BCCI, Intex Mobiles will pay Rs 16 crore for the two-year deal. READ: MS Dhoni among iconic cricketers to play for new teams in IPL 2016 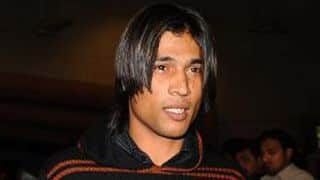