Punjab’s opposition Congress leadership on Monday urged KXIP to stay put, saying that the state’s situation would not remain the same.

Chandigarh: With IPL team Kings XI Punjab seeking a change in home ground from the state’s Mohali to Dharamsala in neighbouring Himachal Pradesh on security grounds, Punjab’s opposition Congress leadership on Monday urged the team to stay put, saying that the state’s situation would not remain the same. According to reports, the KXIP team management has approached the BCCI seeking change of its home ground from Mohali To Dharamshala, citing the security situation and even revival of “terrorism” in Punjab as reasons. Reacting to the KXIP fears on the Punjab situation, Congress’ state chief Amarinder Singh on Monday expressed “grave concern over the fears expressed by the Kings XI cricket team about the deteriorating law and order situation in Punjab”. Kings XI Punjab wary of attacks in Mohali similar to Paris; want venue shifted to Pune

Holding the state’s Akali Dal government in Punjab responsible for the “sense of fear and uncertainty”, he said that the KXIP episode will further discourage potential investors from investing in Punjab who are already apprehensive over the law and order situation in the state. “It would be absolutely wrong to summarily dismiss their [KXIP] concerns as exaggerated since an atmosphere of fear and uncertainty was created in the state deliberately during last few months,” Amarinder said in a statement issued. Virender Sehwag to be retained by Kings XI Punjab

Punjab has seen violent protests in October this year following incidents of sacrilege of Guru Granth Sahib. Radical Sikh elements have come to the forefront following these incidents. “I hope that the KXIP team reviews its plans to move out of Mohali. We assure them that Punjab will always remain peaceful despite the deliberate attempts by the Akali government at controlled destabilisation to divert public attention from its all round failures. It is matter of one year more and everything will be back to normal,” Amarinder said. Lashing out at Chief Minister Parkash Singh Badal and Deputy Chief Minister Sukhbir Badal for the state’s situation, he said that instead of staging sate sponsored rallies, they should take measures to restore the people’s confidence. IPL working group committee: We have compiled suggestions from all stakeholders 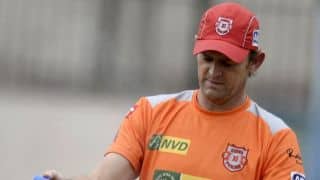