Match 45of IPL 2016 will be played between Kolkata Knight Riders and Rising Pune Supergiants at Eden Gardens, Kolkata on Saturday.

Kolkata Knight Riders (KKR) are set to hosts Rising Pune Supergiants (RPS) in Match 45 of IPL 2016 at Eden Gardens, Kolkata. The live streaming of the match will be available on starsports.com while online streaming will be available on hotstar.com. As for live telecast the match will be shown on Sony ESPN HD, Sony ESPN, Set Pix HD, Set Pix and Set Max. KKR, who have been in stellar form this season have throughout managed to maintain their spot in the top-four of the points table, as they look to get another win here and inch closer to the playoffs berth. While RPS, on the other hand, who have virtually been knocked out of the playoffs contention, would too aim for a win here and try to spoil KKR’s playoffs party. FULL CRICKET SCORECARD: Kolkata Knight Riders vs Rising Pune Supergiants, IPL 2016, Match 45 at Kolkata

KKR, who are coming off a losing performance in their previous tie against Gujarat Lions (GL), aim for a turn around, and try to win at least two more games from their remaining four matches to seal their playoffs berth. RPS, on the other hand, who have been more or less knocked out for a playoffs berth, can still qualify mathematically, but would need something more than a miracle to make that happen. Overall, it’s a battle to two desperate teams on the cards.

With the game being played at Eden, it could again be a slow wicket, and the skippers could opt to move in with a spin dominated side. As for the condition, KKR would definitely be the favourite to win this tie, considering their relative amount of spin attack. However, RPS too cannot be counted out of the tie as with the seam bowlers they posses, it could be their night out as well. 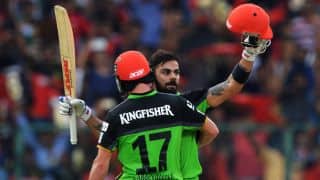