Mumbai Indians captain Rohit Sharma today said his team would be looking to get off to a winning start this season and pick up an early momentum, something it missed in the last two editions of the Indian Premier League.

Mumbai:  Mumbai Indians captain Rohit Sharma today said his team would be looking to get off to a winning start this season and pick up an early momentum, something it missed in the last two editions of the Indian Premier League. “Over the last couple of years Mumbai has not had a good start, losing the first four games. The focus within the team is to get to a good start. It’s very important to start the tournament well,” said Sharma ahead of defending champions MI’s opening tie against new IPL outfit, Rising Pune Supergiants, at the Wankhede Stadium on April 9.In the 2014 edition of IPL, when the first half of the tournament was played in the United Arab Emirates because of the general elections in India, MI had started disastrously by losing their first five games, However, they managed to turn it around at their home venue, Wankhede Stadium. Thereafter they lost to Chennai Super Kings in the Eliminator. In the last season, Mumbai Indians lost five out of their first six games before they stormed to the summit clash. In the final, they defeated Chennai Super Kings at the Eden Gardens in Kolkata to win the title for the second time.

Sharma, whose form with the bat along with that of West Indian Lendl Simmons played a key role in the turnaround last season, said he would want to gain early momentum this year. “T20 is a lot about momentum. To start off on a good note is very important. We have stressed on it. Over the last couple of years we did not start well, but we went on to win the title (in 2015). We don’t want to do that this year.

“Obviously it’s important to get some wins on board at the start and carry that momentum towards next game so that we are well placed. We want to start on a high note. IPL is a format where we have to take one game at a time,” said the skipper. Sharma said that India’s limited over skipper Mahendra Singh Dhoni, who had led suspended franchise Chennai Super Kings so successfully over the last eight years, too would be keen to start on a winning note while captaining Pune outfit.

Reflecting on the intense rivalry between the MI and the then CSK, Sharma said: “Along with MI, they have been one of the most consistent teams in IPL. The kind of quality they brought to the table was immense. Yes, we will miss them as a team. Everyone will miss playing against them as they were tough competitors.

“But it’s (Supergiants) a new team and some of them (old CSK players) are there, but obviously it won’t be the same. Knowing Dhoni, he will want to start off on a winning note. We will take this game as another game.Sharma, who notched up 482 runs to end as MI’s second highest run scorer after Simmons’ 540 last season, said he intended to open the batting.

“A lot depends on what sort of balance is needed. We have spoken about it. I would preferably open the innings. I would like to start the innings and see after 4-5 games. We had got some exciting players in the auction. I am happy at the way things are turning out at practice sessions. It’s all about getting the right balance in the team. If that means coming down the order I will do so,” he added.

Sharma also said that the team’s bowlers knew they needed to be aggressive when bowling on the batsman-friendly Wankhede tracks. “When we play at Wankhede, we bowl with the new ball to take wickets and not just contain. They should be there to get the batsmen out. There’s not much offer from the pitch. Bowlers who have done that have been successful here. Batsmen always try to come hard and so there’s always opportunity to take wickets. Bowlers who have been aggressive have done well at the Wankhede. Preparation is the key when you play on a wicket which has not got much to offer to bowlers,” he explained.Sharma feels his team knows how to counter the dew factor while defending a total.

“We play a lot of games with the dew coming down. Generally it does in the second half. We had played under those conditions and done well. Guys are used to these conditions, except the newcomers who will have to get adjusted. We have played here many a time and obviously this is our fortress and our home. We should know about the conditions better than others,” said Sharma. 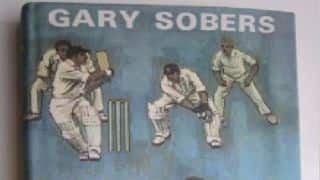 When Garry Sobers lent his name to a science-fiction novel

“Are you comfortable with your own wife or someone else’s?” Suresh Raina quips