Royal Challengers Bangalore (RCB) are on a winning streak currently. The Virat Kohli-led team qualified for the playoffs of the Indian Premier League (IPL) after beating Delhi Daredevils by 6 wickets in a must-win game. After their win RCB’s team and coaching staff were welcomed by the hotel staff of The Ritz-Carlton hotel in Bangalore where they are staying. The members of the hotel staff gave a superb reception to the team as they reached the hotel. The team was welcomed with chants of “RCB…RCB” along with claps as they entered the hotel. The team was also congratulated by the hotel staff as they walked inside. ALSO READ: Virat Kohli 81 runs short of creating history in IPL 2016

The team has been riding on their captain Virat Kohli’s splendid form this season. Kohli has scored 919 runs so far in the tournament, holds the Orange cap and has also become the highest run-getter in a single IPL season. Kohli again played a match-winning knock of 54 off 45 balls as he anchored the RCB innings after the loss of Chris Gayle and AB de Villiers. Delhi Daredevils on the other hand were restricted to just 138-8 in 20 overs after Yuzvendra Chahal picked up figures of 3-32 in his 4 overs. RCB won easily with 11 balls to spare and headed into the playoffs spot ranked 2nd on the Points Table.

RCB will be up against Gujarat Lions in Qualifier 1 of IPL 2016 at the M.Chinnaswamy Stadium in Bengaluru on Tuesday. The winner of the tie will become the first finalist of the season whereas the loser will play the winner of the match between Sunrisers Hyderabad (SRH) and Kolkata Knight Riders (KKR). 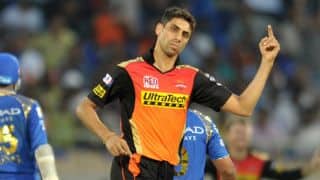