Despite having a career marred with injuries, Watson represented his national side in 59 Test's, 190 ODI's and 58 T20I's

Royal Challengers Bangalore superstar Shane Watson has revealed the trick behind keeping oneself fit. Watson, who recently retired after the T20 World Cup 2016, represented Australia between 2002 and 2016. Despite having a career marred with injuries, Watson represented his national side in 59 Test’s, 190 ODI’s and 58 T20I’s. Currently plying his trade with RCB in IPL 2016, Watto said he made a few mistakes in his career related to fitness, and advised others to follow simple practice. His early years were hampered with regular injuries, which meant he missed many games for Australia. In 2009, he decided to change his fitness techniques, which helped him big time. FULL SCORECARD: Kings XI Punjab vs Royal Challengers Bangalore, IPL 2016, Match 39 at Mohali

Speaking to cricket.au.com, Watson said, “If I was helping someone coming through who has similar (injury) issues to me, there are two things I would definitely recommend. The first is the mediation side of things – just have a bit of chill out time, because life and cricket is all very busy and you just need time for your body and mind to relax a bit.

“But the most important thing is yoga. For quite a while a lot of people were saying you shouldn’t stretch, you shouldn’t be over-flexible, so I hardly stretched.  But now I’ve been doing yoga and it’s just changed things totally. I would have got a different result if I had have done yoga throughout my career, there’s no doubt. It’s only half an hour a day before training, before playing. It’s pretty simple and I think that might have made a big difference.” ALSO READ: Shane Watson names Dale Steyn, Stuart Broad as toughest bowlers he faced in Tests

He also revealed excess time in gym early on were a big reason for his injuries. “For a lot of the time throughout my career I was pretty desperate to be able to say fit, so I was willing to try anything legally to get fit and stay fit. For a period of time I used to go to sleep with a specific machine that had sensors that were attached around my legs, around my ankles,” he said.

“It was more about regeneration, sending through a mild electric current that you couldn’t feel but it was a way to regenerate your muscles and your body while you were sleeping. I did that for a couple of years. I travelled with my own physio for a couple of years because I was that desperate to be able to just get all the help that I needed. I got into the Ayurveda side of things, understanding Ayurveda medicine which is based on ancient Indian medicine.”

“Whether it’s turmeric or ghee or warm milk, there are so many different things you can have or do depending on how you feel or the weather. There are different techniques to get your body in balance, that’s what they talk about. I travelled with an altitude machine (a mask that dispenses low oxygenated air) for a bit to be able to train at altitude.”

“Instead of having to overtrain, which was one of my biggest issues when I was younger, it meant that even if it was 15 minutes on a bike or 10 minutes on a treadmill, the actual physiological benefits were much greater. The other thing I tried for quite a while was dry needling, that (Bupa Support Team doctor) Peter Brukner did.”

“I was getting that done five times a week and I did it for about 12-18 months. It’s incredibly painful but the benefits that I got out of it … especially if I had a little niggle, it was able to release it. But that’s when I moved on to yoga in order to find another way where I wasn’t getting really sore. Every time I got needles, I was still pretty sore the next day. I tried to find a way to able to get the same benefit which yoga has given me.”

He also revealed a good diet also helped him quite a lot. “The low carb, high fat diet, I did that for quite a while, which for energy was very beneficial, but trying to do it in and around home was quite challenging,” Watson said, who was two young children. It was ok when I was on tour and away all the time, I could pick and choose, but when I was at home having to cook, or (wife) Lee having to cook, it made it more challenging.”

“That’s why I’ve gone onto the 5:2 diet which is the fasting for two days, which I did initially for a month and now while I’m playing I’m doing one day a week which I’ve found very beneficial as well. Like anything, when you’re desperate, like I was a number of times, you’re willing to try anything legally to be able to give yourself some respite, to be able to stay fit for a period of time. I’ve just about tried everything you possible could.” 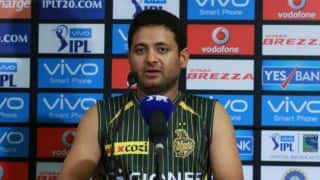