The former Indian captain, Sourav Ganguly, feels that the business end of the group stage is well set up with some interesting matches lined up before the playoffs commence.  He feels, “Kolkata Knight Riders (KKR) continue to of be the best team on show. They may have lost a couple of matches on trot, but have managed to comeback strongly. The games against Royal Challengers Bangalore (RCB) and Kings XI Punjab showed why they stand apart as they have a fair mix in the side which has been playing together for some time now and thus enjoy each other’s confidence in a crisis. These close victories will go a long way in helping the boys to believe that no game is over till the end. Russell has improved a lot and his presence will help even if they have to rest Narine. His big hitting in the game against RCB and then his last over against Kings XI Punjab indicates how important he is to the team’s cause at the moment.” Full Cricket Scorecard: Delhi Daredevils vs Rising Pune Supergiants, IPL 2016, Match 33 at Delhi

According to Times of India, Ganguly stated that the RCB have been let down several times because of their bowling and have lost games which should have been won. Being the captain of the side for a long time, Ganguly understands the burden of such losses and added,” To pick oneself up after such losses is hard and their loss against the Knight Riders saw some heads dropping on the field as they realized that it was their game which was being taken away. On the other hand, Dhoni’s side,Rising Pune Supergiants, hasn’t been able to get their momentum going in the tournament and have been plagued by a series of injuries thereby losing many important players, which has hurt them.”

The Bengal Tiger has been most impressed by Zaheer Khan’s Delhi Daredevils who are playing refreshing cricket.  Ganguly praised the veteran fast bowler by saying that, “he is proving his effectiveness with the ball in all ties which not only shows that responsibility sits well on his shoulders but also that class is always permanent.” 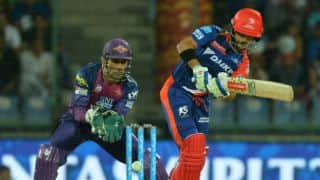