Amid the furore over water being being used to maintain cricket pitches for IPL games in drought-hit Maharashtra, Sunrisers Hyderabad mentor VVS Laxman said shifting matches is not a solution for what is now a national problem

Hyderabad: Amid the furore over water being being used to maintain cricket pitches for IPL games in drought-hit Maharashtra, Sunrisers Hyderabad mentor VVS Laxman today said shifting matches is not a solution for what is now a national problem. “I don’t think that it is a solution. You have to find out the root cause of the main problem. As I mentioned, it’s been bad as far as monsoon are concerned. It’s not only a problem in one state but throughout the country. So, shifting from Mumbai will not be a real solution,” he told reporters here at an event. IPL 2016: Mustafizur Rahman is set to make entry in Sunrisers Hyderabad with an open mind

Asserting that shortage of water is a fallout of global warming and climate change, Laxman said it is a phenomenon that affects the whole country. “Identify the root cause and I am sure the government is looking into it and the necessary departments have to take all the precautions so that it does not happen. Because, this is going to be a problem. We have seen so much of global warming. One of the major effects is climate change which indirectly will affect the water. We have seen that in the past. It affects the country, not one or two cities,” Laxman said.

IPL, besides helping young cricketers to learn from some of the experienced players, also adds to the economy of the country, Laxman claimed. “Both are very crucial. I definitely feel for the farmers, what they are going through. This year, because of a bad monsoon, there is a lot water shortage. Not only for farmers, but throughout the country, there is a lot of water shortage. I know everyone is looking for negatives as far as IPL is concerned.

“There are a lot of benefits. It is a game which not only helps youngsters learn from some of the exceptional talent from India, but also all over the world. It also adds to the economy of the country,” he said. “Sachin had some big plans where he wants to (help) as cricket fraternity wants to come and contribute, which I am sure will happen in the near future,” he said. 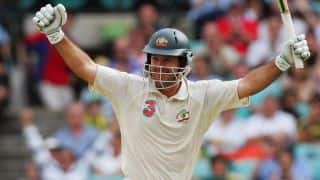 Players should be judged on Test performances: Ricky Ponting