Kolkata Knight Riders (KKR) had won their last seven matches against Kings XI Punjab (KXIP) before the two teams locked horns in match No. 11 of Indian Premier League (IPL) 2017. To make matters more demanding, KXIP had come up victorious in only two of their six games at Eden Gardens. The fate did not change. KKR registered yet another comprehensive win over KXIP, also gifting them their first defeat in the 10th edition. In a contest that saw Gautam Gambhir score an unbeaten 72 and Umesh Yadav take a four-wicket haul, Sunil Narine opened the innings in the absence of Chris Lynn and swatted 37 off 18. He was adjudged Man of the Match, for he also shone with the ball taking 1 for 19 in 4 overs. Live Cricket Scorecard: Kolkata Knight Riders vs Kings XI Punjab, Match 11 at Eden Gardens

Though the target of 171 looked stiff, KKR had last season’s stats on their side five of six games were won by the chasing team. Gambhir, at the toss, had stated the same, adding that the track will not change in the second innings. The decision worked, and KKR were at the doorstep of victory in their first home game.

Narine had a bad start to the evening. He dropped a regulation catch at third-man. In addition, he was given a nod ahead of all-rounder Shakib Al Hasan. The ploy may or may not backfire. Narine may provide impetus with the ball, but is not as good a batsman as Shakib. However, to everyone’s surprise, Narine opened the innings with Gautam Gambhir when everyone expected Robin Uthappa to partner his captain in the absence of injured Lynn.

Narine, in hindsight, had opened for Melbourne Renegades in Big Bash League (BBL) 2016-17 and scored 21 off 13. Gambhir backed Narine to do the same. With a devil-may-care look on his face, Narine smashed 37 off 18. He started off with a scythe past point, but the highlight of the day was his consecutive sixes and a four off Varun Aaron.

Meanwhile, Gambhir’s 72 not out took him past David Warner, earning him the Orange Cap. Gambhir also equalled Warner in scoring most IPL half-centuries (33) in this innings.

Five KXIP batsmen score in 20s but none of them could up the ante despite having a blistering start. From 53 for 1, they were reduced to 170 for 9. Live cricket updates: KKR vs KXIP, match 10, IPL 2017

Piyush Chawla took a wicket off his very first delivery. However, he ended with figures of 3-0-36-1. For that matter, he at least got a wicket. Of all the six bowlers, Trent Boult could not bag a wicket, thanks to Narine’s drop catch. Boult, though, would have forgiven Narine after his match-winning performance.

It was still not clear as to who would be adjudged Man of the Match. Gambhir stayed unbeaten. Above all, Umesh Yadav had triggered a collapse with consecutive wickets of Glenn Maxwell and Saha. In fact, it was his spell that restricted KXIP below 200. Anyway, Narine did his bit with both bat and ball, and took away the cake. 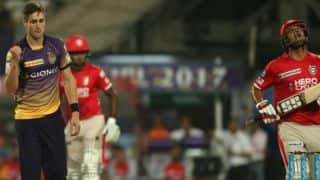