IPL 2017 auctions will be held in Bengaluru by the end of this month.

Veteran batsman Yuvraj Singh on Thursday praised England all-rounder Ben Stokes saying the 25-year-old is an overall package and will surely get big bucks in the upcoming Indian Premier League (IPL) 2017 auctions. The auctions will be held later this month in Bengaluru.  The 35-year-old southpaw also said the cash-rich league will improve the game of the budding English cricketers. England lost the third and final T20I against hosts, India, at M. Chinnaswammy Stadium, Bengaluru by 75 runs to concede the three-match series 2-1. With this, England completed a tough tour of India wherein they lost all series (five-Test series, three-ODI series and T20Is) to return back home.

“He’s a quality hitter, fast bowler and fielder. He’ll definitely get the big bucks. He brings a lot to the table,” Yuvraj was quoted as saying by BBC. “If these guys come and play in the IPL, their skills will improve. The more they play in different conditions, the better they will become,” he added. India vs England, 3rd T20I: Suresh Raina’s six hits 6-year-old; escapes injury

The Punjab batsman admitted the Indian players always enjoy bantering with the English players on the field. “I always see Ben and Virat Kohli having a go at each other. It’s great for cricket to have passion. We always have banter with the English. My old battles were with Andrew Flintoff,” he added. 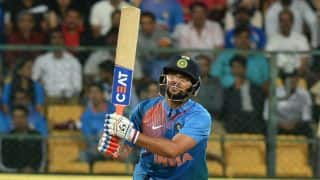