"This is a chance which I will work towards my team's advantage with stalwarts like MS Dhoni, Faf du Plessis, Ravichandran Ashwin and Steve Smith, to learn and enjoy the games at the same time." - Ben Stokes

Indian Premier League (IPL) franchise Rising Pune Supergiant ( RPS) on Thursday welcomed the new addition in the team, England all-rounder Ben Stokes, by handing over him the official team jersey in the presence of team owner Sanjiv Goenka alongside their dynamic new captain Steven Smith and spirited middle-order batsman Ajinkya Rahane. Stokes stole the show in the 2017 IPL auction held on February 20 at the Ritz-Carlton hotel in Bengaluru, as he was snapped up for a record sum of Rs 14.5 crores by Rising Pune Supergiant. The sum also made the England all-rounder second most expensive player to be purchased behind Yuvraj Singh, who was once snapped up for Rs. 16 crore by Royal Challengers Bangalore. Also read: AB de Villiers to captain RCB in absence of Kohli

Speaking on the occasion, Sanjiv Goenka, Chairman, RP- Sanjiv Goenka Group said, “On behalf of the entire family of Rising Pune Supergiant, I would like to congratulate the team’s think tank for putting up a good side for the upcoming season of IPL. On behalf of the team management I welcome Ben Stokes in our family. Steven Smith has performed well for last one year, his leadership inspires and will help the team work together as a unit.”

The newest addition to the side English all-rounder, Ben Stokes, elaborating on his new role in Rising Pune Supergiant, said, “I am glad to be roped in by Pune team at the auction. I am hopeful to live up to the high expectation from fans in Pune as well as India. Playing for Rising Pune Supergiant is definitely going to be a high point of my career. This is a chance which I will work towards my team’s advantage with stalwarts like MS Dhoni, Faf du Plessis, Ravichandran Ashwin and Steve Smith, to learn and enjoy the games at the same time.”

“The exposure you get in the competitions like these [BBL and IPL], you don’t get in England. You get to play and share dressing room with the best players in the world, which is missing there,” Stokes told media persons.

India’s top order batsman who started his international career with Twenty20 International in the year 2011, Ajinkya Rahane happily spoke about his part in the team, “I am quite in sync with the team structure as this will be my second year with Rising Pune Supergiant. Our team is well balanced with a good mix of talent from both national and international players. Ben Stokes is one of the most talented all-rounders in the world and we hope to get good support from him. Imran Tahir’s inclusion is definitely going to strengthen our bowling department and will lend variety to the team.”

After fantastic performance in recent India- Australia cricket series captain Steven Smith has been endowed with a new responsibility of leading the team in this edition of IPL. Leading Australia with his dynamic captaincy in all three formats of cricket since 2015 and ending 2016 successfully after topping the ICC rankings due to his high-octane performances throughout the year Steven Smith was the best choice to captain the team who will bring in all his experiences playing for the Australian side.

Steve Smith spoke about his new role as the Captain of Rising Pune Supergiant, “I am looking forward to my new responsibility with much integrity and fervor. My experience of playing in India has been wonderful so far. This year we also have a new member Ben Stokes with us who will balance experience and skill in right dose. High and orderly performance with good bowling, fielding and batting will be the benchmark for judging the team. We hope to make Pune proud with good cricket.”

The team also announced Motorola as their Team Sponsor for the 10th edition of IPL which starts on April 5.

Motorola is one of India’s leading handset manufacturer and will be investing in an association with an IPL team for the first time. The Rising Pune Supergiant squad comprises of star players M. S. Dhoni, Steve Smith, Ravichandran Ashwin, Ajinkya Rahane, Ben Stokes and Faf Du Plessis, supplemented by other Indian and foreign talent. The Motorola logo will be seen on the front of the Rising Pune Supergiant uniform.

Commenting on the association, Raghu Iyer, CEO, Rising Pune Supergiant, said, “We are delighted to be partnering Motorola, a global brand and India’s leading handset maker in what is a fiercely competitive industry. We are sure this association will be mutually beneficial for both companies. We aim to make our partnership a powerful enabler and medium for their brand to communicate with their customers. We look forward to helping them create value and achieve the best possible exposure through this partnership.

Sudhin Mathur, ? Managing Director- Motorola Mobility India, Country Head- Lenovo Mobile Group said “Rising Pune Supergiant and Motorola are a perfect fit. Both are challenger brands with a focus on breaking limitations to drive performance and innovation, as well as have a culture of being different for the sake of being better.” 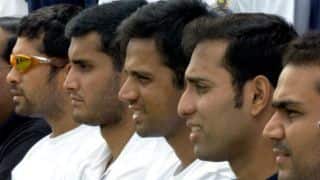