The costliest purchase of the Indian Premier League (IPL) 2017 auction, Ben Stokes lived up to the billing on Saturday, slamming his maiden fifty.

The costliest purchase of the Indian Premier League (IPL) 2017 auction, Ben Stokes lived up to the billing on Saturday, slamming his maiden fifty to revive a stuttering Rising Pune Supergiant (RPS) against Kings XI Punjab (KXIP) in the fourth match of the tournament. Stokes struck a timely half-century, scoring 50 off 32 balls and added 61 runs for the fifth wicket with Manoj Tiwary to help RPS post a competitive target of 164 against an inspired KXIP at the Holkar Stadium in Indore. On his part, Tiwary played an extremely crucial innings of 23-ball 40 not out when all their big guns in the top-order were knocked over for cheap. FULL CRICKET SCORES: Kings XI Punjab (KXIP) vs Rising Pune Supergiant (RPS), IPL 2017

Stokes and Tiwary added 61 runs in a little over 6.1 overs after getting together at a time when RPS were struggling, with Ajinkya Rahane (19), Steven Smith (26) and MS Dhoni (5) were dismissed for cheap. Opener Mayank Agarwal flopped once again as he was cleaned up in the first over. Stokes and Tiwary got together when Rising Pune Supergiant were struggling at 71 for 4 after 11.2 overs, and by the time the fifth-wicket partnership was broken, the visiting side was put in a position to get a total in excess of 150 on a dual-pace wicket at the Holkar Stadium. FULL CRICKET UPDATES: Kings XI Punjab (KXIP) vs Rising Pune Supergiant (RPS), IPL 2017

RPS turned up the heat by scoring 100 runs in the last 10 overs, after Kings XI Punjab made a spirited start to their IPL campaign on Saturday on a green-top wicket at Indore. Sandeep Sharma got enough movement off the wicket to prise out the first wicket. Mayank Agarwal, who fell for a 5-ball six one night ago, continued to struggle for runs as he played an awkward stroke on a ball that nipped back in, and took down his middle-stump.

Rising Pune Supergiant soon realised they will have to be watchful early on, and the cautious start ensured only 3 runs were scored off the first 2 overs. The pressure was maintained well by KXIP till the fourth over, but a spilled catch by Manan Vohra at cover gave Rahane a lifeline, and the batsman followed it up with a six and a boundary off the next two balls to provide his time a move-on.

Smith joined in soon, when he cracked two consecutive boundaries off Sandeep through cover to ensure RPS ended with 32 runs in the first 5 overs. Just when RPS were looking on the road to recovery with Smith and Rahane getting quick runs, double bowling changes brought them as many wickets.

Rahane fell to the IPL debutant Thangarasu Natarajan, scooping the ball straight to Marcus Stoinis at sweeper cover, falling for a 15-ball 19. One over later, Smith, who was once again looking in rich form, played a shot too early, getting a leading edge that flew straight to Vohra, who did well to grab a chance near the ropes.

KXIP did well to keep a lid on both Rahane and Smith for cheap, after they had struck impressive match-winning fifties in their previous match against Mumbai Indians (MI).

RPS were once again left with rebuilding work to do with MS Dhoni and Stokes coming together. While Stokes continued to play his shots, Dhoni decided to take some time to settle down and then launch an attack. However, Dhoni ended playing one back to Swapnil Singh in the 12th over, falling for a mere 5 off 11 balls. The bowler hobbled to collect what was a simple chance, as he managed to complete the dismissal on the fourth attempt.

For Stokes and Tiwary, it was all about rotating the strike as well as hitting the big shots on lose balls. Stokes was particularly belligerent, swinging his bat with a lot of force to hit the ball. Tiwary was smart, giving the strike to his in-form partner more often than not, but also went for his strokes. One of his sixes were hit over backward point, and showed good skills in hitting the slower balls towards the end. 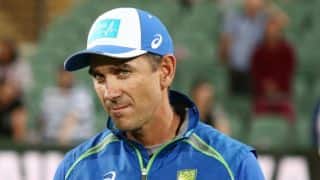 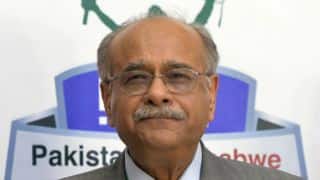