The match between Sunrisers Hyderabad (SRH) and Kings XI Punjab (KXIP) in match 19 of Indian Premier League (IPL) 2017 turned out to be a nail-biting thriller. In the end SRH prevailed courtesy their stronghold in the bowling arsenal. David Warner played a captain s knock to guide his side to 159 for 6 before Bhuvneshwar Kumar, Mohammad Nabi and Rashid Khan wreaked havoc on KXIP s big hitters with swing and spin on a pitch not easy to bat on. While the Afghan duo stated they would want to better their performance in the upcoming games, Bhuvneshwar shied away from taking credit in the 5-run win despite career-best figures of 5 for 19. Full Cricket Scorecard, Sunrisers Hyderabad vs Kings XI Punjab, IPL 2017, Match 19

In an interactive session with iplt20.com, Bhuvneshwar interviewed the Afghan duo and spoke about his mindset bowling the penultimate over. He began by asking Nabi of his experience of playing his first IPL game. Nabi stated, I was a bit under pressure playing my first game. Obviously playing in one the biggest stages is bound to put you under pressure. I am glad I got a chance to bat and bowl in my very first game. My first over was forgettable though, being hit for a six. I just wanted to bowl wicket to wicket and make sure that I tie down the runs. But I am glad I could come back and pick a crucial wicket for the team. I hope to better my performance if I get a chance in the coming games.

Bhuvneshwar then credited the role of Rashid for carving out two crucial wickets in three balls. He inquired what was going in Rashid s mind when he bowled with the match in balance. Rashid said: I did get under the pump once I went for runs but I had self-belief that I will come back stronger in the next few overs. I know I have been hit for runs on deliveries that I bowled too loose. I wanted to bowl to the wicket and according to the plan. It did go haywire but I will try to better my performance in the next game.

Bhuvneshwar was quick to point out how important Rashid has been for the side. When asked about his preparations before bowling, 19-year-old Rashid said, Every time I come to bowl, I try to out think the batsman. If I feel that the batsman is expecting a leg-break, I bowl a googly and try to outfox them. I think that is the reason I have been getting wickets. Dot balls are very important in T20s and help you get wickets. I try to curb the runs, get dots and then go for the wickets.

Bought for INR 3 millions, Nabi could not do much with the bat but turned the heat with the ball. Bhuvneshwar asked him on how he absorbed the pressure while fielding in those crunch moments of the match.

My heart was racing. It was a tight contest and to add to it there were two wides in the last over which made the target even closer. Manan Vohra was brilliant and almost won it single-handedly. You (Bhuvneshwar) were brilliant with the ball at the death and changed the face of the game in the end , told Nabi. This was the first such instance of two players from Associate Nations featuring for the same side in an IPL game.

Bhuvneshwar had a pleasant outing against KXIP. Not only did he bowl within the stumps and got a five-for, he also retained the Purple Cap. With 5-0-19-5, Bhuvneshwar recorded his best figures in T20 cricket and the second-best by an Indian pacer in IPL (overall 6th). Speaking on his performance, he stated, It was a satisfying performance personally and by the entire bowling unit. I did end up getting five wickets, but I won t take credit for the win. Everyone pitched in with good performances and were instrumental in tonight s win. In such thrilling contests, you do worry about bowling well at the death and hope for the catches to stick. We could do most of it with a few minor blips. The wicket was not easy to bat on but Warner played an outstanding innings and later Rashid pitched in with a six in the last over which was almost like game-changing for us.

Bhuvneshwar brushed aside the fact that he was facing pressure bowling the 19th over: There wasn t much pressure on me because I have bowled under such situations in the past. I was mentally prepared to bowl the second last over and I had a clear plan when I ran to bowl. Vohra almost took the game away from us but I knew what I had to do while bowling to him. It worked off well and thankfully we ended up with a win. Sunrisers are known for their bowling strength and defending low totals. Tonight was just an example of the same and it was a complete team effort. 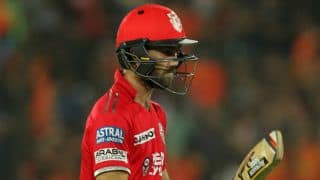 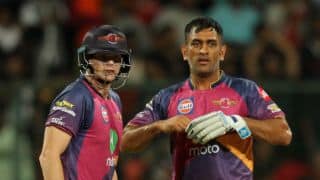