For a bowler who is known for swing bowling, Bhuvneshwar has improved many folds, which is evident in the ongoing season of IPL as he has a bagful of wickets in his account.

Bhuvneshwar Kumar is certainly one of the most improved limited-overs cricket bowlers in India, ever since he had a poor run in the Indian Premier League (IPL) 2015 and subsequently with India against South Africa. In the final ODI of the five-match India versus South Africa series, Bhuvneshwar conceded 106 from his quota of 10 overs. For a bowler who is known for swing bowling, Bhuvneshwar has improved many folds, which is evident in the ongoing season of IPL as he has a bagful of wickets in his account. Even in the previous edition of IPL, Bhuvneshwar had finished as the leading wicket-taker for Sunrisers Hyderabad. FULL CRICKET SCORECARD: Sunrisers Hyderabad vs Kings XI Punjab Match 19

The right-arm seamer is a vastly different bowler than what he was back then, getting most of his deliveries right. His yorkers come out consistently and are generally spot-on. Speaking to the Economic Times, he opened up on this topic and said, “Over the last year I have added a few yards to my pace and that s what is making a big difference. To bowl at 125kmph at this level wasn t good enough and now I m clocking 135-140kmph. That helps because I have always been able to swing the ball. Swing at a decent pace is always difficult to face. Bowling at the death is a challenge and I am aware that batsmen want to go after you. So length, pace and accuracy all become important.”

While Bhuvneshwar remains a regular fixture in the Sunrisers Hyderabad side, it will not be a surprise if India pick him up for the ICC Champions Trophy to be played in England. However, Bhuvneshwar does not want to think so far and says, “I have not yet thought about the Champions Trophy. At the moment all my focus is on the IPL. But having said that there is no doubt it is a huge tournament and we want to do well going in as defending champions. ”

“I am very keen to play a part if I get an opportunity. I have enjoyed bowling in England and am confident I will do well. What s the difference between bowling in T20 cricket and in 50-over cricket? Do you have to change much? No, not much. I have the same job to do. Pick wickets,” said Bhuvneshwar.

When asked about his SRH skipper David Warner, Bhuvneshwar termed him as bowler’s captain. “It is a good all-round team. Warner is a bowler s captain. It has never happened that I have asked him for a particular field and he has not given it to me. It is the same for every bowler. He backs his bowlers and trusts them. He knows it is about believing in us and does so all the time. We will need to forget the losses and win the next few games,” added Bhuvneshwar.

Before this edition of IPL, there were some heated moments witnessed during the Border-Gavaskar Trophy 2016-17 between Indian and Australian players but they are all back together in the tournament. Bhuvneshwar denied of having any issue with Warner for instance and said, “We are all professionals and we know what to do when we are playing for a franchise. When playing for India, it is about doing your best for your country. It is my job to try and get Warner out and he will try to score off me. But when playing for Hyderabad, he is my captain and we plot things together. It was never an issue to adjust after the test series. It was a great series, but now it s a thing of the past.”

Talking about what he expects going ahead, Bhuvneshwar expressed, “All I want to do is bowl well and pick wickets. Not worry too much about results because if I do my bit right, results will come. Everyone wants to do well and I am no different, but I don t want to put any pressure on myself by setting targets.”

Currently, like previous edition of IPL, Bhuvneshwar is once again the leading wicket-taker in the tournament with 10 wickets from 4 matches so far. 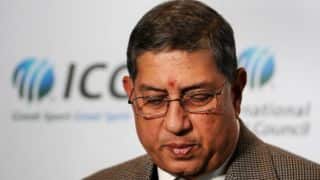