Chris Gayle on Tuesday created history when he completed his 10,000 runs in T20 cricket, during the Indian Premier League (IPL) 2017 match for Royal Challengers Bangalore (RCB) against the Gujarat Lions. Gayle had missed out on bringing up the landmark achievement a few times earlier in the ongoing IPL 10, but needing a mere 3 runs to cross the 10,000-run mark, the burly West Indian went past the milestone finally. Before this game, Gayle had scored 9.997 runs in 289 matches with 18 centuries, with the highest being 175 not out which he scored for Royal Challengers Bangalore against the now-defunct Pune Warriors. FULL CRICKET SCORECARD: Gujarat Lions (GL) vs Royal Challengers Bangalore (RCB) IPL 2017, Match 20

Gayle, who was last seen in the Test circuit three years ago, does not play T20 Internationals for West Indies anymore. In fact, his last appearance for the Caribbean side in any format was in April 2016, and he might have played his last international match. However, there is no stopping Gayle as far as playing competitive T20 cricket for various franchises, and there is a long list of teams that Gayle has played for. In the IPL, he has been a permanent member of the RCB side, having played earlier in the tournament for Kolkata Knight Riders (KKR). Gayle has also taken two four-wicket hauls in the format. FULL IPL 2017 Score, Gujarat Lions (GL) vs Royal Challengers Bangalore (RCB) IPL 10, Match 20

On Tuesday, Gayle got to his record with a sinlge in the fourth over. But before that, Virat Kohli hit a flurry of boundaries to provide his team momentum early on. Here is the list of players with most runs in T20 cricket:

Among the teams that Gayle has played for are RCB, Jamaica Tallawahs, Melbourne Renegades, Sydney Thunder, Karachi Kings, Lahore Qalandars, Barisal Burners, and a few more. Perceived as a T20 specialist, the format suits the cricketer who depends solely on power-hitting rather than working around the balls for ones and twos. This has led to criticism for the explosive batsman, who has had to make way for other overseas cricketers due to lack of runs. 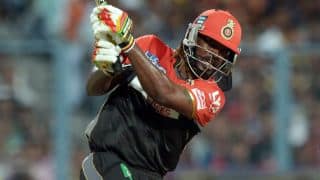 Chris Gayle and other batsmen with most T20 runs in history