The chief architects of RCB's mammoth total were Gayle (77) and Kohli (64), with Travis Head and Kedar Jadhav playing the supporting role. In this process, Gayle became the first man on this planet to complete 10,000 runs in T20 cricket.

There were records galore at the Saurashtra Cricket Association (SCA) Stadium in Rajkot on Tuesday night during Match 20 of Indian Premier League (IPL) between Gujarat Lions (GL) and Royal Challengers Bangalore (RCB), as the latter posted a massive 213 for 2 after being put into bat first. The chief architects of this mammoth total were Chris Gayle (77) and skipper Virat Kohli (64), with Travis Head and Kedar Jadhav playing the supporting role. In this process, Gayle became the first man on this planet to complete 10,000 runs in Twenty20 (T20) cricket. For Gujarat, Basil Thampi and Andrew Tye were the saving grace while other bowlers got the thrashing. FULL CRICKET SCORECARD: Gujarat Lions (GL) vs Royal Challengers Bangalore (RCB) IPL 2017, Match 20

Earlier, Gujarat skipper Suresh Raina won the toss and opted to field first. Both the teams made a few changes to their squad after a string of losses came their way, forcing them to languish at the bottom of the IPL 2017 points table. For RCB, Samuel Badree and AB de Villiers missed out, with the latter s omission being a forced one due to injury. Gayle and Travis Head replaced them. GL made three changes, bringing in Aaron Finch who missed the last game due to a bizarre reason of lost kit bag Shivil Kaushik and Dhawal Kulkarni in place of Jason Roy, Praveen Kumar and Munaf Patel.

Barring the win at the toss, nothing clicked for Raina and Co. on the field. Gayle, who was just three runs away from his landmark, started slowly as always. Kohli, on the other hand, started off brilliantly, hitting fours off the fifth balls of first two overs. It was however in the third over that he took off, hitting Kulkarni for three back-to-back fours.

In the next over, Gayle got to the milestone and then celebrated it with a six. The slow starter that he is, Gayle launched his assault once he got the monkey off the back, hitting Ravindra Jadeja for two sixes and two fours in the next over. Here on, boundaries started raining as Gayle and Kohli hit at least a four or a six every over. The two batsmen put up 100 runs on the board in no time, thus becoming the first pair to register 10 century stands in T20s.

Gayle s onslaught continued, and it stopped only when Thampi sent him back for 77 off 38 balls (5 x 4s, 7 x 6s). Head then replaced him and gave a good stand to Kohli. The two added 37 before Kohli fell for 50-ball 64 off Dwayne Smith s bowling in the 16th over. The Indian captain hit 7 fours and a six enroute his knock.

Kedar Jadhav then joined forces with Head as the two carted Gujarat bowlers for 54 runs in last 25 balls. Head remained unbeaten on 30 of 16, while Jadhav was more destructive: collecting 38 runs off 16 balls. RCB finished on 213 for 2

For Gujarat, the pace trio of Thampi, Kulkarni and Andrew Tye conceded less than 10 RPO and rest of the bowlers went beyond that. It will take a monumental effort from the GL batsmen to gun that RCB total down in the second innings. 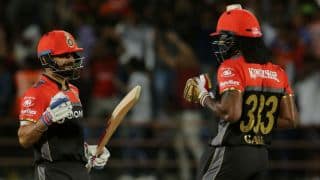 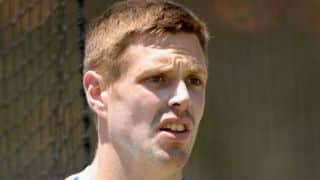