But amongst all this, it was during the end of 10th over of the second innings that left everyone in a splits.

Sunrisers Hyderabad (SRH) riding on David Warner s 33rd half-century thumped Gujarat Lions (GL) in Match 6 of the ongoing Indian Premier League (IPL) 2017. SRH chased down the target of 136 in just 15.3 overs with Warner remaining unbeaten on 76 off just 45 deliveries along with Moises Henriques who remained unbeaten on 52 off 39 deliveries putting up a 108-run stand for the second wicket. Earlier, GL put in to bat first, were halted at 135 as Rashid Khan took 3 wickets in his 4 overs conceding just 19 runs. For GL, except for Jason Roy (31), Dinesh Karthik (30) and Dwayne Smith (37) none other batsmen could cross the border of 15 runs. FULL CRICKET SCORECARD: Sunrisers Hyderabad (SRH) vs Gujarat Lions (GL), IPL 2017 Match 6

The game had many highlights including Rashid s wily spell and the Warner-Henriques partnership. But amongst all this, it was during the end of 10th over of the second innings that left everyone in splits. Basil Thampi, bowled a back of a length delivery to Henriques which the batsman defended to the right of the bowler. Thampi in his follow through dived across to save the ball but could not. That dive took off Thampi s shoe and Warner- who was actually running to complete the single stopped in between to pick up the shoe and handed it neatly to Thampi.

You can watch the video here:

Warner did complete the single being the fit athlete he is, but this act definitely left everyone in splits and also the present crowd who gave a huge roar for Warner s presence of mind who was all smiles after his act! 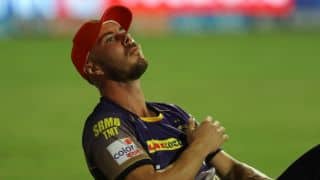