Chasing an imposing target 193, the Daredevils fell short of 15 runs thanks to some impressive bowling by Siddarth Kaul in the death overs for the Sunrisers.

David Warner-led Sunrisers Hyderabad (SRH) continued their home domination by beating Delhi Daredevils (DD) by 15 runs in match 21 of 10th edition of Indian Premier League (IPL) at Rajiv Gandhi International Stadium, Uppal, Hyderabad. This was SRH s first win over DD since 2015. Chasing an imposing target 193, the Daredevils fell short of 15 runs thanks to some impressive bowling by Siddarth Kaul in the death overs for the Sunrisers. Kaul bowled 4 overs and conceded 32 runs, and was rewarded with the wicket of Angelo Mathews in the penultimate ball of the match. FULL CRICKET SCORECARD, Sunrisers Hyderabad vs Delhi Daredevils Match 21

Warner could also have opted for Moises Henriques in the final over, but opted for young Kaul, who did brilliantly. Not only did Kaul defend 24 in the final over, but was good in his first spell, in which he gave away only 11 from first 2 overs. When asked about Kaul’s bowling, Warner was in full praise: Bhuvi [Bhuvneshwar Kumar] was exceptional and Kaul was superb tonight. It s a challenging tournament and credit to all the fast bowlers for keeping fit. For us batters it s easy. Thanks to the crowd for the support.

He also spoke about the brilliant batting done by Kane Williamson, who scored 51-ball 89 that included 6 fours and 5 sixes: It was an outstanding performance from the guys. Kane played brilliantly and laid the platform for us. Sometimes people miss out on few guys, but they know that it s just to make sure that we get the right balance. We knew we wanted to keep wickets in hand and that was what exactly Kane and Shikhar did tonight. For us it is about backing ourselves and executing our plans. That is what I ask the guys to do, to come out and give their 100 per cent, said Warner.

This fifty was the second for Williamson in IPL. SRH will play their next game against Rising Pune Supergiant at Pune on Saturday. 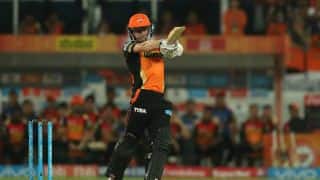 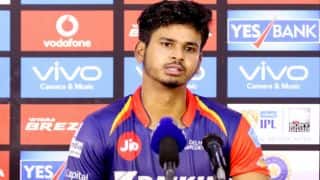