Chasing 169 to win, Rising Pune Supergiant managed a mere 161 for 7 in 20 overs. A win over Delhi Daredevils would have taken RPS into the IPL 10 playoffs, but with a defeat, their final game on Sunday against Kings XI Punjab becomes a near knockout. In their chase, Rising Pune Supergiant were jolted on the very first ball of their innings, when Zaheer Khan got one through the gap between bat and pads of Ajinkya Rahane. The ball came in to the batsman, whose middle stump was knocked down. With this wicket, Zaheer completed his 100 dismissals in IPL history, becoming overall the 10th bowler to do so and only the second left-arm pacer after Ashish Nehra. FULL CRICKET UPDATE: Delhi Daredevils (DD) vs Rising Pune Supergiant (RPS), IPL 10, Match 52

In the first over, RPS may have lost a wicket but Smith and Rahul Tripathi counterattacked with a boundary each off Zaheer. While Smith s first boundary provided ominous signs to the fielding side, Tripathi struggled throughout his innings against Delhi Daredevils.

In the second over, Smith seemed to have got his first six, but Shreyas Iyer was terrific near the ropes, saving 5 runs for his side. In the next over from Nadeem, Smith was beaten on a delivery that turned sharply away from him, but the batsman recovered to smack a four, six and a four off the next 3 balls to make it RPS over.

Tripathi had a subdued start and end. He got one boundary but perished soon, falling on a short ball from Zaheer outside off. Tripathi scored a 6-ball 7 and his dismissal brought Manoj Tiwary at the crease. Tiwary struck consecutive fours off the sixth over of the innings off Mohammed Shami to begin with.

Tiwary added 38 runs with Smith for the third wicket, but their partnership was broken in the 10th over of the chase by Nadeem. The bowler dropped a delivery short to Smith, who looked to swat it on the leg-side. Smith missed to connect, and was trapped leg-before for a fluent 38 off 32 balls with 4 boundaries and 1 six.

Stokes combined with Tiwary to take Rising Pune Supergiant ahead. He began with a four in the over in which Smith was dismissed, and a thick edge off Amit Mishra flew over the first-slip for another four.

Tiwary got a lifeline in the 14th over of the innings when Sanju Samson could not hold on to a catch which was in front of him, despite the fielder putting in a dive. In the same over, from Marlon Samuels, Stokes smacked a six over long-on and Tiwary ended with a four.

Delhi, on their part, continued to make mistakes as Tiwary got a lifeline once again. Tiwary hit one high in the air, and Karun Nair, fielding at point, spilled a regulation catch. To their credit, RPS did well to keep the asking rate under 10. Stokes smashed a six off Mohammed Shami in the 16th over, but perished 2 balls later. Stokes scored 33 off 25 balls with 3 boundaries and 2 sixes.

Mohammed Shami did the unthinkable when he ran out none other than MS Dhoni. Fielding at short fine-leg, Shami threw at the non-striker s end as Dhoni was late to make a sprint. Dhoni was caught short of his crease, and RPS soon landed in a position of trouble. Off the last 12 balls, RPS needed as many as 33 runs.

The credit for turning the tide completely in favour of Delhi Daredevils goes to Shami, who not only ran out Dhoni, but also bowled the penultimate over in which he got rid of Dan Christian and gave away a mere 8 runs.

With 25 needed off the final over, Tiwary raised hopes of a turnaround when he smacked the first 2 balls from Pat Cummins for sixes. With 13 needed off 4, Cummins bowled a wide down the leg. But the bowler soon got his act together, and did not let Tiwary to do any more damage. On the final ball, Cummins cleaned up Tiwary for 60 off 45 balls, with the help of 3 sixes and 5 fours.

Earlier in the game, Nair put behind a poor run since he got his triple-hundred against England late last year to make 64, powering Delhi Daredevils to a total of 168 for 8 in their 20 overs. Rishabh Pant scored a brisk 36 and Marlon Samuels made 27, as Delhi set a tricky target for Rising Pune Supergiant.

Man of the Match: Karun Nair 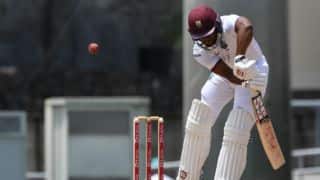