Amit Mishra returned with the figures of 4-0-18-2 and Pat Cummins claimed 2 for 20 off his 4 overs, as Delhi Daredevils did a terrific job of restricting Mumbai under 150.

Amit Mishra returned with the figures of 4-0-18-2 and Pat Cummins claimed 2 for 20 off his 4 overs, as Delhi Daredevils did a terrific job of restricting Mumbai under 150 on what has remained a batting-friendly wicket at the Wankhede Stadium in Mumbai. Mumbai Indians (MI) crawled to a total of 142 for 8 against Delhi Daredevils (DD) on Saturday night, in the 25th match of the ongoing Indian Premier League (IPL) 2017 tournament. For Mumbai Indians, Jos Buttler top scored with 28 and Kieron Pollard managed 26, as none of their batsmen could really get going against disciplined bowling. FULL CRICKET SCORECARD: Mumbai Indians (MI) vs Delhi Daredevils (DD), IPL 10, Match 25

Mumbai Indians were off to a confident start after Delhi Daredevils won the toss and invited the home side to bat first. Both the teams made plenty of changes, with Corey Anderson and Aditya Tare coming back in for Delhi, and the South African Rabada making his IPL debut. On the other hand, Lasith Malinga sat out for the Mumbai Indians with Mitchell Johnson coming in. Rabada began with an expensive over in which he struggled for line. There were 5 extra runs given with Rabada bowling one down the leg side. FULL CRICKET UPDATES: Mumbai Indians (MI) vs Delhi Daredevils (DD), IPL 10, Match 25

Jos Buttler made intentions clear when he smacked a six off Chris Morris in the second over s fourth ball, and hit the next ball for a boundary. However, there was a lifeline provided to the Mumbai batsman when Rishabh Pant spilled a regulation catch, with the batsman making room and trying to scoop the ball over the wicket.

Rabada came on for the fourth over, and Buttler smashed it over the leg side for another six. However, with Parthiv coming on strike, Rabada began bowling fuller, aiming for the wickets. After missing out on a leg-before appeal, there was success for the South African bowler who cleaned up Parthiv, thus snaffling his first IPL wicket.

Nitish Rana and Buttler joined forces to rebuild for Mumbai. Buttler hit two boundaries off Zaheer in the sixth over, but their plans were spoiled by a brilliant effort from Sanju Samson. Responding to a tight single was Buttler s misjudgement, as Samson ran in from his position inside the circle on the leg side and a direct hit did the rest.

Rohit and Rana could not do much for their side as the latter was dismissed by Cummins, getting the in-form batsman caught at deep square leg for a mere 8. Rana has been in red-hot form for Mumbai but he had a forgettable game on Saturday night.

Mumbai skidded further when Mishra consolidated Rohit Sharma s struggles against leg-spinners. This time, the Mumbai captain was caught at deep square leg for a mere 5.

With their top-order blown away, Mumbai pinned hopes on Krunal Pandya and Kieron Pollard. While the pair resisted for a few overs, runs were hard to come by with Delhi Daredevils being all over their opponents. Mishra added more to his kitty when Pant caught a late-cut off Krunal s bat in the 13th over, piling up further misery on the Mumbai Indians.

Pollard tried waging a lone battle when Mumbai Indians were in tatters. He added 36 runs for the sixth wicket with Hardik Pandya, and scored 26 runs with the help of 4 boundaries. Just when it started to appear Mumbai Indians may post a late fight-back, Pollard fell to Cummins in the first ball of the 18th over. 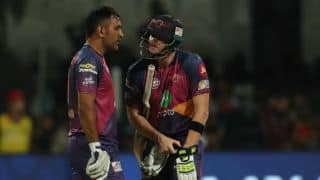